The way we interpret games and the experiences they provide us with have always been dynamic. What may have been a shaping experience for one, may very well have been just another moment for another. NieR: Automata is a game that works to experiment with the notions of what a video game can be. While the first NieR played with the nature of how an increased perspective can change the way a story plays out, Automata goes to further lengths to play off of the perspective of the player in more ways than one.

{Spoilers for NieR and NieR: Automata}

When I was prepping myself for NieR:Automata, I was faced with multiple expectations as a player of the original NieR. NieR: Gestalt ended with an effective death knell for humanity, a suggestion that all replicants and the human souls (now shades), who belonged to them would eventually wither and die from the Black Scrawl disease. With this knowledge of how things would play out, I was, in a sense, blindsided by Automata’s core plot justification of Androids fighting to reclaim earth for humankind.

While I was confused, the game gradually convinced me as it did the main characters of 2B and 9S that somehow humans really had been sent to the moon. It would seem natural, how else could the world exist as it was otherwise? That’s what makes the reveal of Route B, where 9S discovers that mankind was in fact extinguished by the Black Scrawl still have an impact. It feels like its own new reveal, despite the fact that the game had really just been covering up what was already known in a fog of mistrust. For those who had only played Automata the experience has a different effect altogether.

For one who knew nothing about NieR: Gestalt or the events within, this reveal plays off as an even bigger twist. For these players the revelation isn’t necessarily a “gotcha” moment, but more a legitimate flip. The game provides you with documentation and files to research Project Gestalt after the fact, but for those players this is just another aspect of the already intriguing world they’ve been uncovering. That’s the strength of Automata’s writing, that it works not only as an individual work, but as a sequel to a game hardly anyone played.

This duality of perspective is used multiple times throughout Automata, with characters like Emil or the allusions to games like Drakengard, but it’s accomplished most effectively through the character arc of Devola and Popola. For anyone who had played NieR, the appearance of Devola and Popola would be immediately suspect. One of NieR’s big endgame twists was that of Devola and Popola’s betrayal, the unveiling that they were not only allied with the main antagonist, but also were themselves androids. Devola and Popola are introduced in Automata as merchants with an allusion to their mistrust: that they are considered outcasts and a possible threat.

For veteran players, the expectation is immediately one of betrayal, that Devola and Popola are mistrusted because they deserve to be. After all, for us as players, we would spend the entirety of NieR buying into their game and their faux kindness. That effect ends up concurring with new players as well however, thanks to their sheepish introduction and dialogue with NPCs around the camp. Though the players themselves would have no concrete reason to distrust the friendly merchants, the game plants those seeds to put both newcomers and veterans on an equal playing field of mistrust.

This is why I consider the fight outside of the tower towards the end of Automata’s third route one of the most effective moments of storytelling I’ve ever seen in this medium. By putting players’ perspectives on equal footing, they’re able to accomplish a similar emotional resonance for two drastically different perspectives. Though both groups distrust Devola and Popola for different reasons, when they walk out in front of 9S as he’s making his way towards his route’s climax, the feeling is unanimously “Of course.” When the twist plays, and it’s revealed that there never was a real reason to mistrust them, it’s shattering. We were, once again, being played by the game and our expectations to doubt these complete strangers who had only been kind.

The effect is compounded by the post-battle text sequence all about Devola and Popola’s life. Once again, regardless of perspective bias, both groups are more than likely going to feel sorrow and remorse for these characters who had been suffering under expectations we ourselves had been placing on them throughout our playthrough. Just like how it can so easily happen in the real world, we were transposing the actions and words of others onto innocents because that was our first instinct. It feels all the worse too, to learn that both Devola and Popola had been programmed to feel guilt and a need to atone, explaining the way they act when you first meet them and why some people distrusted them. 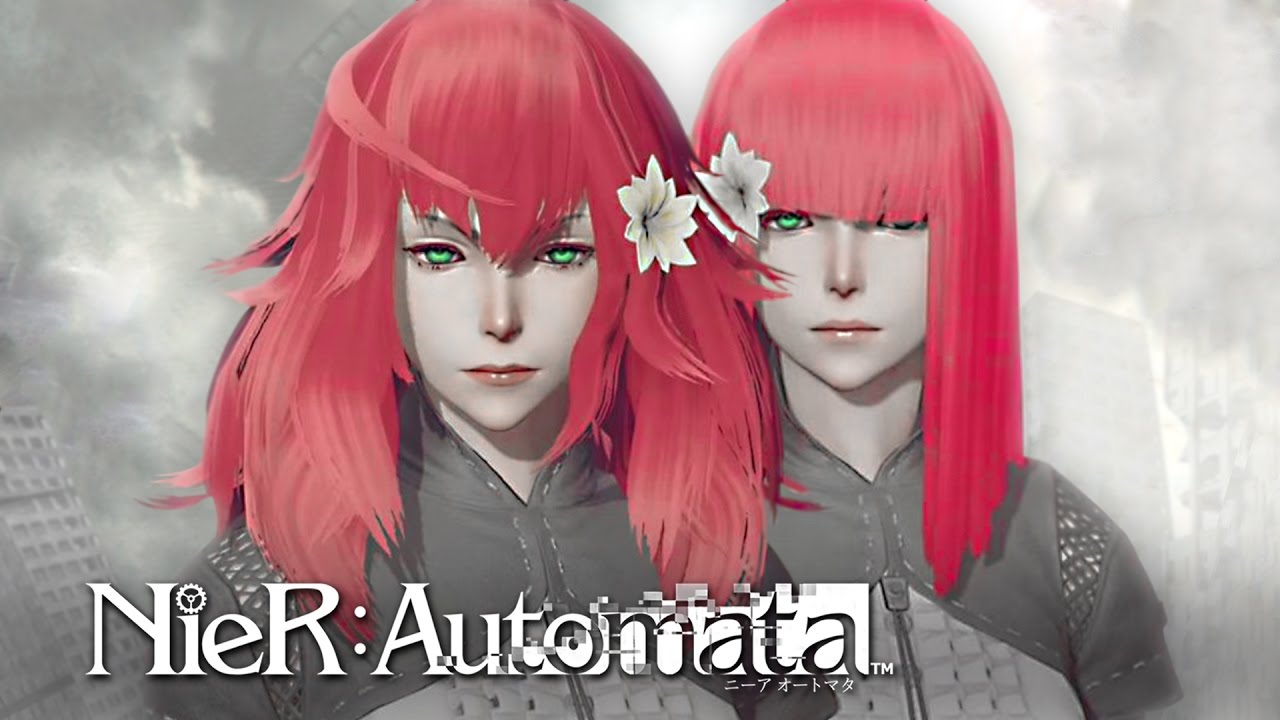 These two events are fascinating executions of of perspective, because they show that Automata isn’t just trying to catch new players up to the level of the old, but trying to bring both together into an equal experience. The Gestalt revelation wouldn’t normally have been a twist for players of NieR, but because of the way the game handles what its characters know and don’t know, it becomes a shocking moment in its own right, if not exactly equivalent. The inverse is true for Devola and Popola, though new players would have no reason to mistrust these characters or know who they are, they’re deemed suspicious and hyper-analyzed because of the words of those around them.

The way Automata plays off of player perspectives doesn’t just work in the favor of expectations though. The gameplay and narrative arc of the main storyline itself feels almost tailor-made for how the player might be feeling at any given time. When the average player finishes Route A, a thought running through their mind is probably one questioning of 9S and his role in the story. So naturally, Route B follows around 9S through the events of the last route, giving a new perspective through not only story, but gameplay as well.

Route B doesn’t just serve in the traditional “second path” function either, it also shows us the perspective of several machines throughout the game, thanks to 9S’ combat conceit of hacking. Antagonists gain layers from their newly exposed egos and thoughts, with Adam and Eve being the most eye-opening. Sidequests like those of the pacifist robots preaching basic nihilism to themselves open up the ideology a lot of the game works off of; and hacking 9S himself later on shows the similarities between androids, and machines.

By the time Route B finishes, we’ll be wanting to know what’s going on with 2B again from a narrative standpoint, and from a gameplay standpoint as well (given 9S isn’t a unit built for combat). The third route gives us this, but defies the expectations of what we want with what the game has to tell. Before the third route begins, we’re given a trailer to show us what will be coming in the second half of the game, with the suggestion that the lavish events being shown are what will play out over the course of the next half. As we get back into the swing of playing 2B, now with her new and fancier combat armor, our wanted perspective is being catered to. After a route full of slow paced hacking and running, we’re back in the high speed hack n’ slash way of things.

The game, of course, turns again and shows what was thought to be the entirety of a new route in hours over the course of a couple dozen minutes. What we’re left with in its wake is the catalyst of Automata’s next perspective assumptions: the death of 2B. From this point on the game presents us with two different playable characters we cycle between at will. In the end you have to play through it all, but you get to choose between two campaigns intended to facilitate the different feelings one might experience.

A2 exists the way she does, as a berserker character bent on killing machines blindly, to represent and give us an outlet for our anger in wake of 2B’s death, while 9S exists to discover and grieve, trying to find context for this sorrow while dealing with the aftermath. The ability to pick and choose based on our feelings at the time, and how each character covers a different part of a reaction to death, is fascinating, and made even more so with the revelation that they work outside of just a meta-narrative idea. A2 has her own motives to kill machines, she has her own life, she has her own goals, but despite this she becomes a conduit for the players feelings at that moment, and her choices and actions become our own.

The same is true of 9S. While we’re able to enact our own motives and desires, we also experience and witness his own. We see him suffer from the death of 2B, we watch him cut down the closest thing he has to a mother in the process, we witness his mental deterioration. This in itself is a transposition of how we might feel over the course of Automata’s gradually depressing campaign. By the time we reach the climax of the third route, we’re left questioning the point of persistence, the value of fighting on, and whether things could ever be alright again. Both A2 and 9S’ paths complement each other, they work together to deliver us towards our ultimate end.

The ending of the third route of NieR: Automata is a narrative gamble. Based entirely off of expectations and player perspectives on the story and its characters, Automata presents you with both ending C, and ending D, as a choice. C would be, sequentially, the correct choice and the game knows this by assigning it to the choice most players would reasonably empathize with in that moment. The idea that the game is so attuned to its players that it already knows what they’re thinking of picking, and have placed it in an almost chronological order is something I’ve been thinking about for months at this point.

Since the assumption then is that Ending D will be played second, before the ultimate ending E, its delegated to be a more sorrowful one. Nothing goes right, A2 falls, 9S seemingly deteriorates completely, and the world below is left to be devastated by tower debris. It is then that the game pushes you with Ending E, it knows right now all you’re thinking is how awful everything is, how terrible it got, and how depressing this game’s world will always be. Ending E asks you then, would you risk more pain for a chance at a happy ending?

NieR Automata is a story about life, and finding meaning in a world that by all accounts doesn’t present one. Through its narrative, the game consistently shows us the different ways we find meaning, and how our perspective can define us, and connect us with others. I’ve never quite seen a piece of media, game or otherwise, play with the structure of a story or what it means to interact quite like this one. Even diving half as close to the depths this story can, is a place all games should strive for.