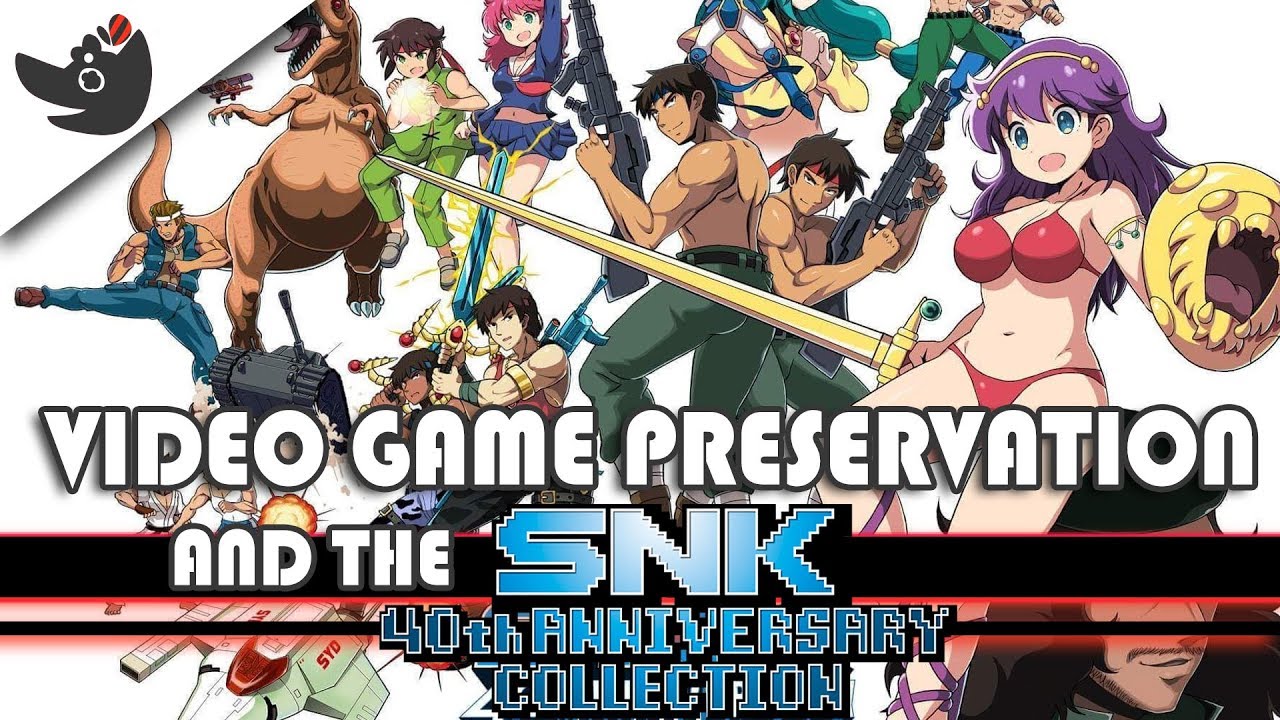 SNK’s 40th Anniversary Collection contains a lot more than what you’d expect from an old game developer’s catalog. It is more than a simple check-off list of old arcade games people might want to see ported to current-gen consoles. When we think of archival work in video games, it’s usually companies like Namco or Sega putting a bunch of games with mascots in them on a disc for advertising purposes, or if we’re lucky it’s an HD upgrade of an old game that you aren’t sure if it ever really existed like Lizardcube’s incredible 2017 remake of, “Wonder Boy: The Dragon’s Trap”. The worst case scenario for game preservation are those plastic joysticks that you get at the department store for fifty bucks that just have a bunch of old games like Pole Position or Centipede or Star Fox 2 loaded on to them. Look, those are essentially trash toys whose only practical preservational use is to turn one corner of your local bar into a barcade for a few weeks until folks get bored and go back to playing darts. With SNK’s 40th Anniversary Collection, Frank Cifaldi’s team at Digital Eclipse have put together something more than a games collection, but a digital archival format that should be absolutely inspiring for all of us who are asking: “how do we preserve the history of video games for future generations?”

Just because they aren’t mainstream “classics” doesn’t mean they aren’t important and valuable.

so SNK 40th is legit and there is a lot happening here. Let’s get the features list out of the way: It has a complete timeline with museum-esque notes on the context of each work, each emulated game has some simple emulation functions (save state, load, etc) but also has a rewind button that undoes your moves (especially helpful for all the quarter-sucking technical shooters), also there is a longplay of every game that you can just watch and scrub through at your leisure, including all 151 minutes of SNK’s rarely developed brand of RPG: Crystalis. You can run the Japanese & Western versions of almost every game. Any of the games that had a console release also has that version available to play which helps compare and contrast how development worked between arcade and console. And on top of it all there are changeable resolutions, including an arcade cabinet-esque portrait mode! Did you see our video showing off Fangamer’s Flip Grip for the Nintendo Switch? We are watching a games collection swag on the very hardware it was built for!

Currently, there are fourteen games in the collection, and each game not only feels like an important piece of the historical journey of SNK’s early development but a lot of them are dang fun! My personal highlights were getting to play Vanguard, Alpha Mission, and Prehistoric Island and getting to see SNK’s space shooter evolve. Also, Athena has aged really well and was incredibly impressive for how much is going on in such a small space. Then you get to jump from that to Psycho Soldier and get to see them start using their mascot characters to do some cool experimenting! Also, all three Ikari Warriors are on here in both arcade and console version, which not only show how SNK improved technologically over a short period of time but also just how dedicated they were to worldwide markets with these heavily Western-coded Hollywood style War Hero Games.

“She’ll read your mind and see if you believe in right or wroooong.”

Everything curated in the 40th Anniversary Collection is SNK before the Neo-Geo in 1990, which means no Fatal Fury, King of Fighters, or Metal Slug; but that’s actually a good thing for a couple of reasons. One, all of the games curated from this era were designed and built on similar philosophical and historical foundations: games designed for coin-op arcade machines that were planned towards being translated to English and usually ported to NES for western home markets. Two, you get to see the roots for all of SNK’s bigger franchises in isolation. When you combine the tank from TNKIII, the dual weapons and co-op from Ikari Warriors or P.O.W, and the hostages from Guerilla War, you basically get Metal Slug.

Also, hey this is a big aside, but SNK made a game where you play as Fidel Castro and Che Guevara to overthrow the US’s Bautista regime in 1950s Cuba with the exact same engine and style that Ikari Warriors used to represent Rambo-esque flaming romps through fascist-occupied jungles. I repeat- it’s a game where you are Fidel Castro and Che Guevara, as super soldiers, liberating Cuba! They made this entire game after having read and been inspired by “Guerilla Warfare” Guevara’s treatise on warfare and revolution within the Americas. The dev team had never been to Cuba even though at one point a trip for the team was planned. So like, late 80s SNK was real in to Communist theory or maybe just really heavy on some kind of 1950s jungle warfare kitsch. Either way SNK saw Che Guevara as real-life Rambo, games history is wack and SNK, welcome to the resistance?

Sorry, back to before I interrupted myself- So in the 90’s the Neo-Geo abruptly changed arcade development as we knew it with multiple games in one mass-produced arcade cabinet, and this SNK collection is like the moment right before all of that happened. So, I’m glad Fatal Fury and KoF aren’t in this collection because it more concisely tells a story in isolation about Japanese Game Development in the 1980s. Hopefully, this also allows for a Neo-Geo collection to come out later as a second volume based on this collection. And if it is anything with the level of detail that this archive has, that would be incredible! Just like a second volume to an encyclopedia series, but interactive!

There continues to be a desperate cry for multiple formats of games archival as games that are the fundamental building blocks of the current generation are getting lost to time. The best that we’ve got right now is Nintendo condensing eras of history into fifteen games and putting them on a proprietary plastic emulator box like the SNES Classic. The best we’ve got now is begging Sega to port Dreamcast games to the Nintendo Switch (some of which can’t be ported because that data has already been lost). The best we’ve got is any ROMs that can still be scraped off the web after Nintendo is done trying to destroy all history of games. (Is that weird that Nintendo is kinda the hinge on all games’ history? That’s weird right? I feel like that’s weird.) None of that is archival or historical preservation because of how it has been perverted by commercialism without adding any kind of context about where, when, or how it came to exist. Nintendo especially tries to make it feel like their games just magically appeared one day, divorced from any kind of human labor or historical context. This SNK 40th Anniversary collection can’t fix all of that, but at least it provides a strong formula for putting archival work up front-and-center and giving everyone context for how these games came to exist. Historical context and concise curation are the forces that help differentiate SNK’s collection from an average commercial release like the Megaman Legacy Collection

Okay I’m gonna blow your mind right now cuz all of that stuff is cool, but there’s something in here that is some like Doc Brown “You’re about to see some serious shit” kind of shit because you see these longplay videos? At any point in the longplay video I can just **BAM** I’m playing now from this point in the longplay.    That’s right, this isn’t actually video at all but an emulated series of inputs! IT’S A GODDAMN TOOL-ASSISTED SPEEDRUN THAT YOU CAN TAKE DIRECT CONTROL OF AT ANY POINT! That’s just incredible.

Who is playing with power NOW, Nintendo? This is real power.

Anecdote time: I got stuck in Athena fighting a late-game boss that was impossible to kill because I didn’t have the right item from a previous level, so I went to the video, and it taught me how to kill that boss and a lot of the cool things I missed while playing, so I scrubbed the video past the boss that killed me, hit [Start Playing] and then started from there to beat the whole game. Later, I was watching Psycho Soldier but the game got so cool that I had to play it and beat it myself… You turn into a phoenix and shoot people with psychic lasers! This rules so hard.

Other highlights from playing through this include: Prehistoric Island the game where you kill gigantic, beautiful dinosaurs like a mega tyrannosaurus takes this sudden and wild twist ending…   Where everyone DIES? Okay! Thanks, F.B.I. director William Sessions. There is also Streetsmart whose ending is very American… Did you know that the world is going to end on October 1st, 1997? Crystalis did. They predicted that lightning bolt that smote the world. I love that even SNK’s Zelda clone has absolutely no chill. And I can’t forget mentioning Vanguard’s lazer-beam-eyeball man or any of the games’ end credits “Congratulations” screens. These really are special and lovely.

What’s amazing about all of this is that there is more coming in the form of DLC. And usually I’d be pretty derisive around games attempting to commodify their own histories, but due to how much good faith has already been built into SNK’s 40th that goodwill becomes respect and in the context of an archive this actually becomes a different beast altogether. With DLC in the works that continued support makes this into what historians call a “Living Archive”. The Sega Mega Collection that is currently on Steam also takes a similar approach where you can download the gamehub for free while the developers continue to add as many Genesis and Mega Drive games as they can to that digital platform and then you buy them in packs. I’m interested to see how long both of these formats can maintain their games collections for. The SNK collection currently exists only as a Switch game which means its lifespan is limited by the Switch’s hardware, meanwhile, Sega’s game hub is only a Steam application and thus is limited by… Steam. *shudders…* Digital purchases are always… fickle.

If you are studying game design then this game is a textbook for you. The curation of all of these games provide a framework for SNK’s design practices in the 80s:

All of these fundamentals make for a really satisfying core game loop regardless of the genre of game. Even if it’s one of SNK’s classic half-baked NES ports that look like pac-man vomit. Even those still play passably enough to be a good advertisement for the quarter-sucking arcade versions.

SNK’s 40th Anniversary Collection is chock-full of important lessons to teach us about Japanese game design from the 80s, it contains interesting and new ideas for preserving games, and it shows us one hell of an escalation in quality and technology from just 1981 to 1990. I’m excited to see how development proceeds going forwards. Will they try to squeeze in the big-name flagship properties like Metal Slug? Or will they maintain their course to archive as much of the 80s as possible and add games like Touch Down Fever? Also, what if this team Digital Eclipse expanded into more companies and we had a collection like this for every game company of the era? We could have a really strong set of encyclopedias exploring this period of games development! For now though, I’ll just take this as a sign that the 80s were entirely dominated by fantasies of Rambo, magical girls with swords, and Communism.