August 27, 2018 | by Zack
Russian Subway Dogs (PC) Review
A Real Tasty Treat of a Game
Summary: A charming arcade-style game with addictive gameplay, a great soundtrack, and a nice art style that doesn't try to be anything more than it is.

Russian Subway Dogs is pretty much exactly what it says on the box. It’s an arcade-style game based on the real life stray dogs that have taught themselves to navigate the complex metro system of Moscow. You play as one of these pups, running behind commuters carrying their hard earned lunches, and barking at them to scare the shawarma out of their hands. It’s a simple, yet elegant formula that surprisingly ends up providing a ton of fun. 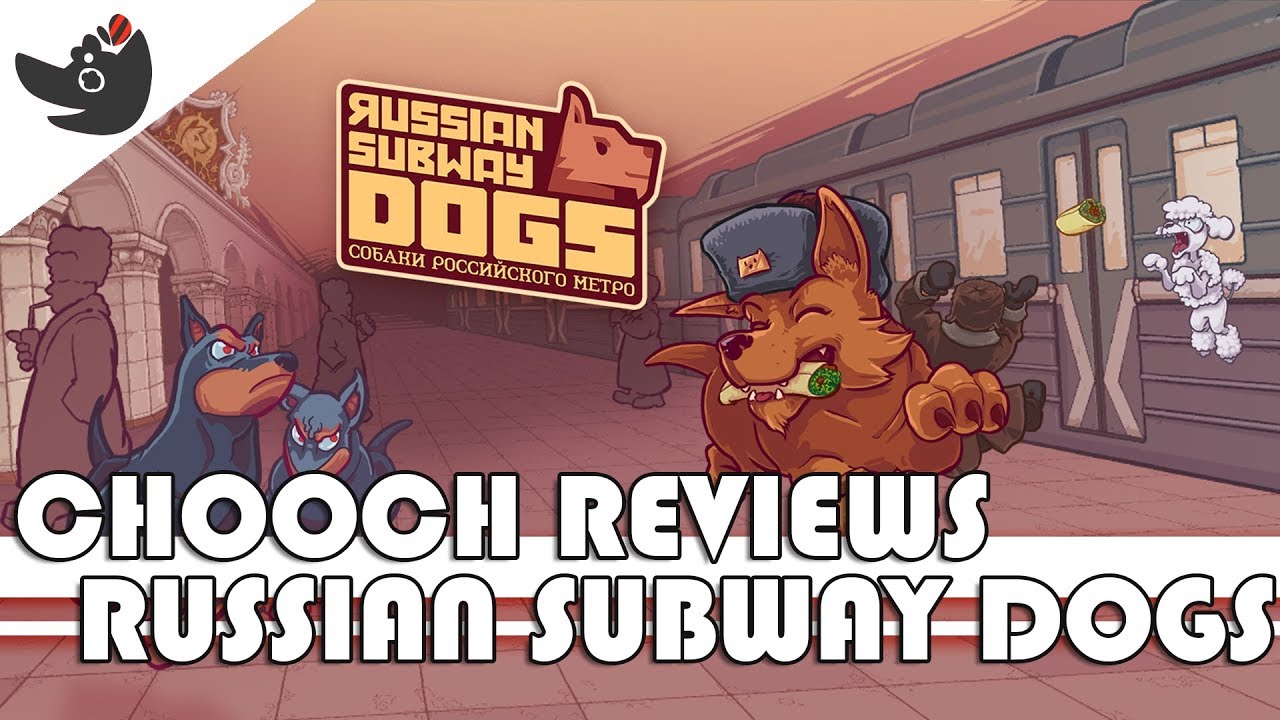 The level progression is based around two things. You start every level at a rank of F, which will steadily increase as you gain points; points you gain by stealing food. Just stealing uncooked shawarma isn’t enough to get through most levels, so you typically need to rely on the bonus points for catching the food in mid-air, or juggling highly explosive vodka to rack up a combo multiplier. To complete the level, your only requirement is to get past a rank of F. However, to unlock further levels, you need to gain a certain number of Bones – a token you obtain for both completing the levels themselves, and the three challenges associated with the levels.

During early parts of the game, the challenges seemed like a breeze, and I would often find myself completing all three in one go. As the game progresses, these stop being such a cakewalk and actually force you to think about your next move –  a bit of a challenge in the fast paced world of the Russian metro. My personal favorite instance of this is a challenge that forces you to play the entire level without barking once, having you to rely on the subway bears – we’ll get to that later – to attack bystanders chugging vodka, slowly yielding bear meat as your key to survival.

Like any arcade-style game, there’s a learning curve to Russian Subway Dogs, but it’s incredibly steady. I quickly got into the groove of things, mastering the art of juggling those extremely-explosive bottles of vodka and racking up the combo multiplier, and using the subsequent explosion to cook my stolen meals and get those sweet, sweet bonus points.

The game also features 12 different characters to play as, a vast majority of whom are from various other indie games, such as Va-11 Hall-A, Ruin the Reckless, and even Nidhogg. Oh, and Question Hound, AKA the “This Is Fine” dog from KC Green’s Gunshow comic, which is… an absurd pull, but a well appreciated one.

The game features a number of different food items for your pup/cat/goat/raccoon/nidhogg to eat, all with various attributes. Some are simply more food options with different point values and properties, while some act as power-ups, such as hot sauce, which allows you to shoot fireballs with your barks, or a cup of coffee, which slows down time for some Max Payne style food snatching. These do a great job of keeping the gameplay fresh, even in the later levels, and allows a nice amount of strategic play. Along with these powerups, there are various enemies to deal with – everything from rival dogs, angry fish-wielding babushkas, and uh… Well, the aforementioned subway bears. Alright. No biggie.

Speaking of the gameplay, this game is so elegantly simple. I lost hours playing this game, just blasting through the levels and, frankly, getting kinda hungry. It’s so easy to get absorbed in a game like this, especially when the gameplay is just so smooth and… Well, fun! It’s an incredibly fun experience all around. The combo multiplier on bouncing vodka bottles seemed to tap directly into the portion of my brain that spent way too long playing the Soccer game on Facebook Messenger. I was absorbed in Russian Subway Dogs’ exciting – if frustrating at times – gameplay, the lovely pixel art, and the fantastic soundtrack, which is full of excellent chiptune Slavic inspired jams from Coins, AKA Peter Chapman, who was the composer for various other games such as Guacamelee!, Modnation Racers, and LittleBigPlanet Karting. Every track feels perfectly placed in this silly recreation of Moscow – especially my personal favorite, the hardbass song that blares from the gopniks carrying the hot sauce/coffee.

There’s dozens of levels to complete, all with their own unique challenges, giving someone who’s a bit of a perfectionist in these types of games plenty of replay value. Alongside the campaign, there’s also an endless mode – available right from the get go, which I really appreciate. Hiding this mode behind the endgame is honestly a trend I wish would die out already. Sometimes you get tired of the mainline game and wanna blow up some poodles until you starve on a subway platform.

Oh, one last detail that’s extremely important and more games need to do. There’s a setting to change the gamepad button display from Xbox buttons to Playstation buttons. As someone who only owns a PS4 controller – which more often than not requires third party software to convince a PC that it’s an Xbox controller – this is a tiny detail that I never knew I needed, but now I don’t know how I’ll live without it in other games.

All in all, Russian Subway Dogs is a solid arcade game, and I thoroughly enjoyed every moment of it. It’s not anything that’ll blow you away, but that’s not what it’s trying to be. It’s just a genuinely fun time, and I honestly recommend it to anyone who enjoys this kind of pick-up-and-play arcade game.