This article has potential spoilers for Super Smash Bros. Ultimate. Or maybe it doesn’t. We don’t know!

The current discussion rocking the Super Smash Bros. community is a leak that many are calling either the banner leak or, funnily enough, the Grinch leak. We’ll get to why that is in a moment, but for now I’ll start by listing what said leak shows.

In an image stitched together from a Snapchat, a new version of the “Everyone is Here!” banner is shown, seemingly revealing seven characters previously unannounced for Smash Ultimate. These characters are Shadow the Hedgehog, Banjo-Kazooie, Isaac from Golden Sun, Mach Rider, Ken from Street Fighter, Geno from Super Mario RPG, and the Chorus Kids/the Glee Club from Rhythm Heaven. As you can see in the image above, the Snapchat has emoji and a message in French that translates to “Fuck Nintendo” over the images.

Not only that, but the image shows a blank version of Battlefield/Final Destination that the characters are normally grouped on in the art, as well as potential plans for how the image would be displayed at events or in stores. Behind the Smash Bros paperwork are images of the Grinch from the new Grinch movie releasing later this year. Some have pointed out that the image of the Grinch facing backwards doesn’t exist yet in any way, meaning this is a brand new render. This lends credibility to this leak coming from a legitimate printing or graphics design company.

At the upper left corner of the image, the Snapchatter’s name has been hastily scribbled out. Unfortunately for him, it wasn’t scribbled out enough, and anons on 4chan quickly figured out his name and looked him up. The artist, Eric Bricard, was confirmed to work for two graphics design firms in France, one of which, Marina PLV, has previously worked with Bandai Namco, the co-developer on Smash Ultimate.

Smaller tidbits back up these claims, including a supposed misprint in Corocoro Magazine that listed there being 108 stages in Smash Ultimate instead of the previously claimed 103. If there are 108, that would match one stage for each non-echo fighter being added (as Shadow and Ken are, obviously). Also, Sakurai posted on Twitter about buying a mech figure for “work purposes”, and said mech has a gun strikingly similar to Mach Rider’s weapon seen in NES artwork.

The most surprising thing is that these seven characters match a previous leak posted on 4chan that people are calling the “Chadendorf leak” due to the photoshopped image of Ganondorf as the Chad meme character.

Not only does this leak point out all seven of the characters on the banner, the leak also mentions that Ray mk 01 from Custom Robo, a Monster Hunter rep, and Dixie Kong were cut from the game. This makes the leaker sound close to development, and may match the supposed “post that ruffled feathers” that a user on Resetera (who correctly predicted Cloud’s reveal in Smash 4) posted about, especially since Nintendo can’t be too keen on someone not only revealing the roster, but cut content as well.

So far this seems like a slam dunk, with all of these occurrences lining up to make a solid case that this leak is real. However, a handful of other things have come up in the following hours, muddying the waters.

First, Marina PLV released a statement claiming they are currently not working with Bandai Namco and are upset at the leak, thinking it will damage future partnerships with the company.

Rumors of privacy leakage on the latest version of the game Super Smash Bros. report a connection with our company. All these rumors only support one idea, journalism is not limited to doing a search on Google. Indeed, the person incriminated in this “rumor”, if it is it, is no longer present in our company since November 2016. Having not updated his profile updated, some have wanted to make a connection with the Marina Workshops that can not exist. Namco is a company we have worked with and want to rework with, this is not currently the case for the launch of Super Smash Bros Ultimate. These rumors are therefore a discredit on our professionalism widely recognized, especially with respect to our commitments on confidentiality. We are currently contacting all these sites and Namco / Nintendo to remove this false information and assess the judicial follow-up. The Marina team.

Marina points out that the supposed Snapchat leaker no longer works for them, and they’re correct. He has two Linkedins, one which lists his work at Marina, and another that lists him working at another similar company, ACP PLV. ACP does such similar work to Marina, in fact, that they too are listed as doing graphics work for video game companies, including Assassin’s Creed marquees for Ubisoft. The leak may have come from them, not Marina.

Next, some have pointed out that the blank Battlefield/Final Destination art doesn’t match previous instances of it shown at E3 this year.

These changes can be easily argued as the whims of a developer, or scaling it down for smaller displays. There’s nothing definitive about this, but it is something to consider.

Lastly, a variety of sources have come out saying they’ve heard things different from the banner. Liam Robertson of DidYouKnowGaming has claimed to have contacted Eric Bricard who has denied any knowledge of this leak.

What I’m hearing now is that Eric Bricard (the artist who supposedly posted the Smash art) was contacted and denied having anything to do with this whole thing. So, it’s looking like the person responsible has been impersonating him.

Liam is also claiming to have seen something that contradicts this leak, but has yet to elaborate.

I have seen some evidence privately that contradicts the image, so I am pretty firm in my belief that this is not real. I will gladly accept that L if I’m wrong.

However, let’s be real, if I was Eric, I wouldn’t admit to this. I’d want to keep my job.

A Smash Bros. Youtuber called PapaGenos has gone on record claiming a source of his heard from a Microsoft employee that not only is Banjo 100% in the game, but said Microsoft employee had heard about the other characters on the banner….AND Incineroar. Incineroar has been a rumored character for months, ever since famed leaker Vergeben mentioned the Pokemon on GameFAQs a while back. Incineroar does not appear on the banner, but other people in this line of work have collaborated that Incineroar is in the game, meaning perhaps that this banner isn’t the full roster, or that it’s completely fake. 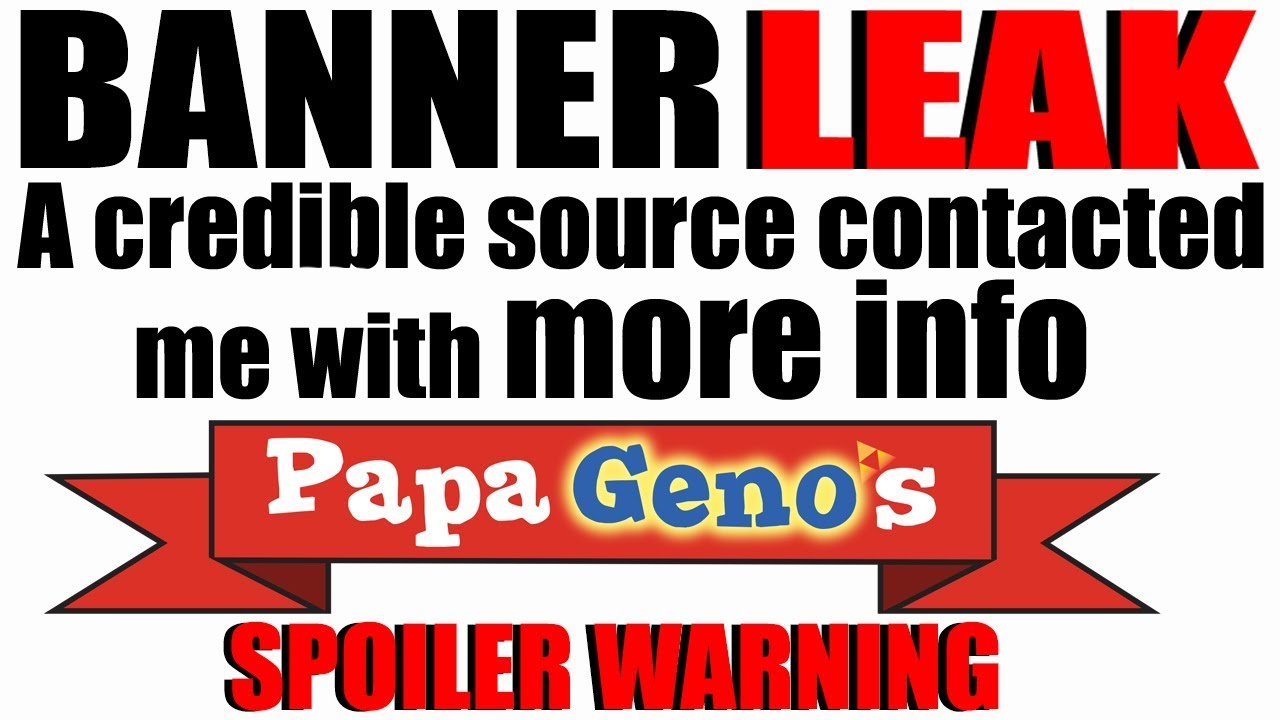 This is everything so far, but new developments are constantly arising. So far, personally, I feel like there isn’t enough proof to disperse this. So many incredibly stupid things are lining up, and I doubt someone would risk their job, photoshop Smash Bros. art AND potentially Grinch assets, and leak their private information all for ten minutes of Internet fame. Yes there are some people claiming otherwise, but for now, I’m leaning towards true.