May 25, 2019 | by Solon
Is Puyo Puyo Champions Enough To Be Sega’s New Esport? [Review]
Puyo Paupers Need Not Apply
Summary: Puyo Puyo Champions for better and for worse, is just Puyo. And with a $10 price tag, it's hard to tell how much Sega values their newly dubbed "eSport" but it could be quite a lot with this "Puyo Gods only" tournament capable edition!

Hey, wanna get your ass kicked by a robot? Because Sega’s newest release puts you one button press away from getting screwed six ways from Sunday by some ones-and-zeroes. Puyo Puyo Champions for the Nintendo Switch, PS4, and PC (called Puyo Puyo eSports in Japan) sets a high difficulty on its very top menu, as it invites you to take two different flavors of butt-whuppings as its introduction to the game. 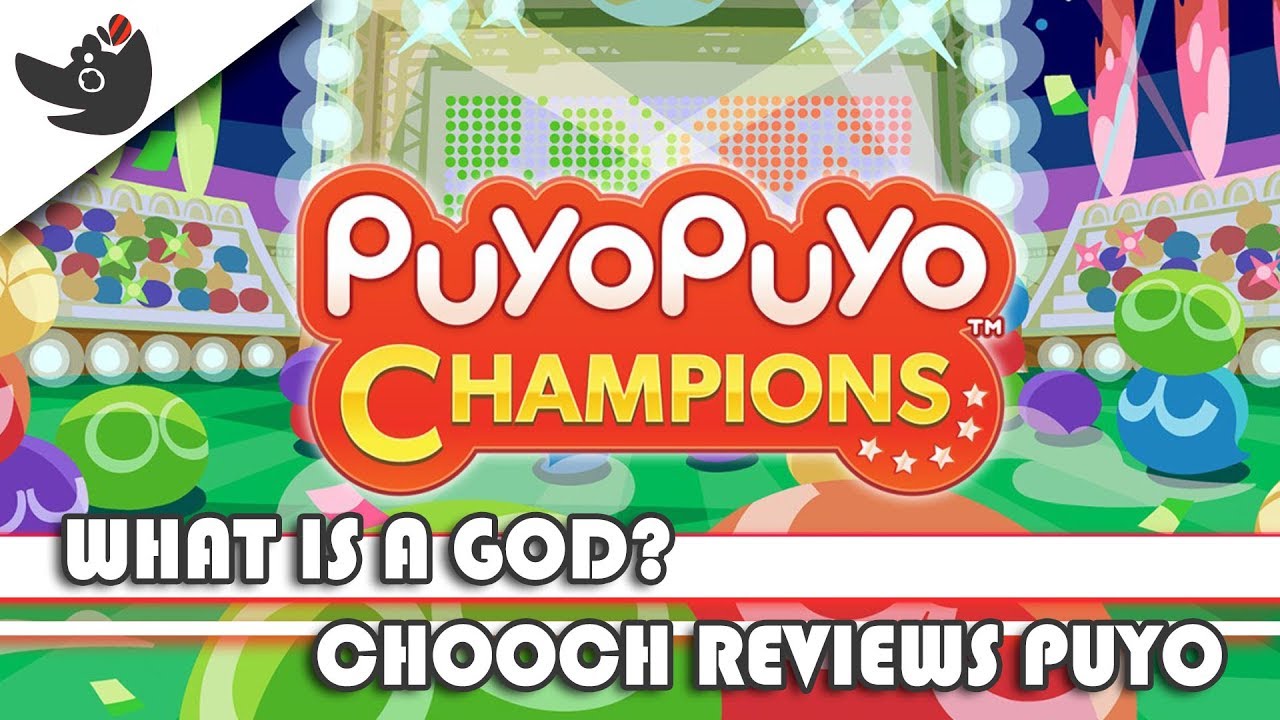 It is very honest to introduce the game like this though, because Puyo Puyo Champions is not setup to be a game about teaching you how to play Puyo. Unlike the recent spin-off, Puyo Puyo Tetris, that shows you the ropes in myriad ways, Champions is strictly for playing pure Puyo online and offline against the toughest challengers around the world.

For those who may have never played Puyo Puyo before, it’s a simple game where colored orbs fall from the top of the screen and slowly pool together at the bottom, and when the player lines up four puyos that match in color, they pop and the stack falls. If the stack falls resulting in more matches, then you get a combo that throws grey garbage puyos at your opponent who then has to make their own matches to remove that garbage. So whoever throws the most garbage at their opponent by making long combo chain is the winner of a round, which at the higher level looks a little something like a tennis match between gods.

If you’ve played Puyo Puyo Tetris, then a lot of the interfaces and styling will look familiar, because Champions was built from the same core game as Puyo Puyo Tetris. The main changes being that there are no more Tetris blocks, or Tetris characters, and the game features two different modes for playing puyo: “Puyo Puyo 2” which is considered to be the most normal ruleset and “Puyo Puyo Fever” mode which adds an extra pattern-recognition mini-game to your regular match where after a certain number of combos, your screen shifts to “Fever Mode” and you have about twenty seconds to knock over as many preset puyo stacks as possible. In my opinion, it’s a short-lived, sugary gimmick that doesn’t really affect much strategically other than to make the games go much longer, but it’s also the only thing in all of Puyo Puyo Champions that could be seen as accessible to new players. Everyone loves a good dynamite domino chain!

In 2004, Puyo Pop Fever was Sega’s final game to come out on the Dreamcast, and that was 15 years ago. Since then Sega’s made Puyo for every console and handheld, except none of it ever came westward until Puyo Puyo Tetris, other than ports of Puyo Puyo Fever on the Sony Walkman. Yeah, that’s a thing! The Sony Walkman had two video games loaded onto it and one of them was Puyo Pop Fever. Huh… Sorry, anyways- So seeing Champions coming out feels like a sign that not only was Puyo Puyo Tetris really successful with its Tetris tag-team push, but that Sega as a company is becoming more comfortable with its European and American audience. Hopefully we can take this to mean that they want to bring more Puyo-adjacent content to the west because this game has a lot of characters and I want to see more of them. Maybe we can get some of that old-school Madou Monogatari? Gotta setup for the Puyo Cinematic Universe!

Speaking of the characters, there’s a whole lot of them in this game. They are cute and seem really fun!… but once you choose a character, all of them just say “1-2-3-4” to count out their combo. They also kinda react to being attacked, winning, or losing, but any flavor that choosing a character may add to a match is completely diminished by how little life they are given during actual gameplay. I started picking Carbuncle just because hearing that annoying “gu” over-and-over mixed it up a little bit. It’s really disappointing because Puyo Tetris gave us a lot of variety with these characters and now it’s gone. It’s another part of Champions that feels dry and serious, it’s like a dad told Puyo Puyo that it was time to ‘grow up and get a real job’ and now Puyo works for esports, ‘look at me now dad! I’m a boring adult just like you are!’

And that is who is playing Puyo Puyo Champions. Adults. In spite of the cheery child-like presentation, this is a game for cold, calculating adults. Puyo is a very solved game. You’ve got stacks, sandwiches, and gtr-chains and those strategies have barely changed over the decades, people have just gotten faster at building them. So the core of the meta anywhere below the highest level of expertise is entirely based on how quickly you can follow your favorite building pattern. Beginners love to learn strategy games like Chess and Go because even when you are getting beaten you still feel like you can play and pursue victory- in Puyo, you know five seconds into a match whether or not you have a chance, and if you’re like me and have only played about 60 hours of casual Puyo, then you usually don’t stand a chance in any online or offline mode that Champions offers. On the upside, my favorite part of Champions is getting to watch incredible Puyo-play with their vs-viewer mode where even a peasant like me can glimpse between the gated bars of Mount Olympus and see the gods frolic.

Is it weird that this is such a niche game? Even if you’re a fan of Puyo then this might not actually be for you at all! With it being called “Puyo Puyo eSports” in Japan, Sega is pushing hard the fact that this game was made for professional competitors. It is a no-nonsense package strictly for practicing your Puyo skills against the best of the best. But can videogames support such a static strategy game like Puyo as an esport? There is precedence for Tetris’s competitive support, so it is possible that a fan-based community can keep up the momentum, but with Sega at the helm, it is unlikely that we’ll be seeing major support from them towards professionalizing Puyo more than the lip-service of titling this small release as “eSports”. The bottom-line is that if you are looking for a full videogame, Puyo Puyo Champions is pretty spartan, but you could also think of it as a $10 Puyo-only expansion to Puyo Puyo Tetris and at that price it is a good bargain.

We give Puyo Puyo Champions a ‘kinda excited’ 3-out-of-5.

That’s the end of the review, three stars, blaaah- but I’m not satisfied as having that be the ending of the discussion. So while we have this platform to talk about Puyo, I want to elaborate a little bit on my thoughts with regards to how Puyo is designed as a game. We’ve talked a lot about Puyo in relation to the much larger and more dynamic Puyo Puyo Tetris which did a lot to change up Puyo Pop. In isolation though, Puyo Champions is exactly what Puyo has always been and that is … not a lot. Especially in my history with the game: Puyo is an add-on… an add-on to a Tetris game, an add-on to a Sega Collections, an add-on to Sonic itself. Puyo is a phone game or a mobile game, or a WALKMAN game! Seeing it here as a self-proclaimed “eSport” is quite a bit of spin that Puyo has never had before. Is it earned? Maybe. The competitive scene is definitely strong enough, but I’m not convinced the game itself is.

Puyo, as a game, thrived during an era of minimalism in systems design: games that focus on one core system and refine it to its utmost, shaving away any excess, usually because they are adapted to also be arcade games. Puyo Puyo Tetris represents a different direction of this design philosophy, like many modern game Puyo Tetris strives for maximalism: a design form that appreciates putting multiple systems together to see how they can interact. Maximalism rejects focusing on one set of rules in favor of overlapping many sets of rules. Sometimes out of market pressure and insecurity, like Red Dead 2’s karma system that doesn’t mesh with its aptitude towards linear story-telling. Other times very recently, maximalism comes from large studios packaging their regular systems all together at once, like Fortnite and Apex Legends adding battle royale matchmaking to their usual suite of system-heavy RPG-based shooter mechanic sets. How does Puyo Puyo eSports compete with that? With this entry, I don’t believe they are rising to the opportunity, simply adding Fever mode isn’t enough (although it is in the right direction). So if we assume a separate system has to be added to Puyo to become more maximalist in design, what could we add? Tetris 99 added massive-multiplayer components to some success. That’s possible, but it feels more quirky and a little opposite of how Puyo normally pushes itself as a blistering head-to-head game. RPG Story Campaign? Ya’ll remember Bomberman 64? That sure was an era… Arcade games with level-ups and story modes. 2004 is BACK baby! Although, honestly Puyo’s roots in RPGs with Madou Monogatari would actually serve that brand really well. RPG Story mechanics could add a lot. Maybe Puyo could add some team-based competitive modes to add more players to the mix? Queue up with the crew to smash some other puyo teams. Sprinkle in some abilities and charge up your ultimate on the road to diamond rank- aww I’m just describing League and Overwatch now. I guess, Maximalism has always lived and died by Blizzard’s giant warehouse of servers, and I’m hopeless. Anyways, there are options here!

These are really dramatic examples (ones that I’d probably never actually go with in favor of small rule changes to add to the Tsu and Fever rulesets) but my point is that the Puyo game style is ripe for iteration and can be built out in many different directions. If Sega really wants to commit to making the best head-to-head fast-paced strategy game that Puyo can be, now is the time to start diversifying – anything to mix up the strategies so that more players can play, or else I’m worried the community will shrivel up just as quickly after all this recent goodwill, because the word on the streets currently is: “Puyo is that game that taught me how much more amazing Tetris is.” How do we get Puyo to rise up and compete with Tetris, culturally? And can we do it with a simple game design tweak, or change in approach? I don’t have a silver-bullet answer upfront, but I think it is a healthy question for a community to pursue, especially one like Puyo that is on the rise and finally has a company as large as Sega trying to backing it up!