Pokémon Sun and Moon are continuing their onslaught towards being just about the best damn Pokémon games they can be this morning, by showing off some new features and, more importantly, the first evolved forms of their three starters in a new trailer. 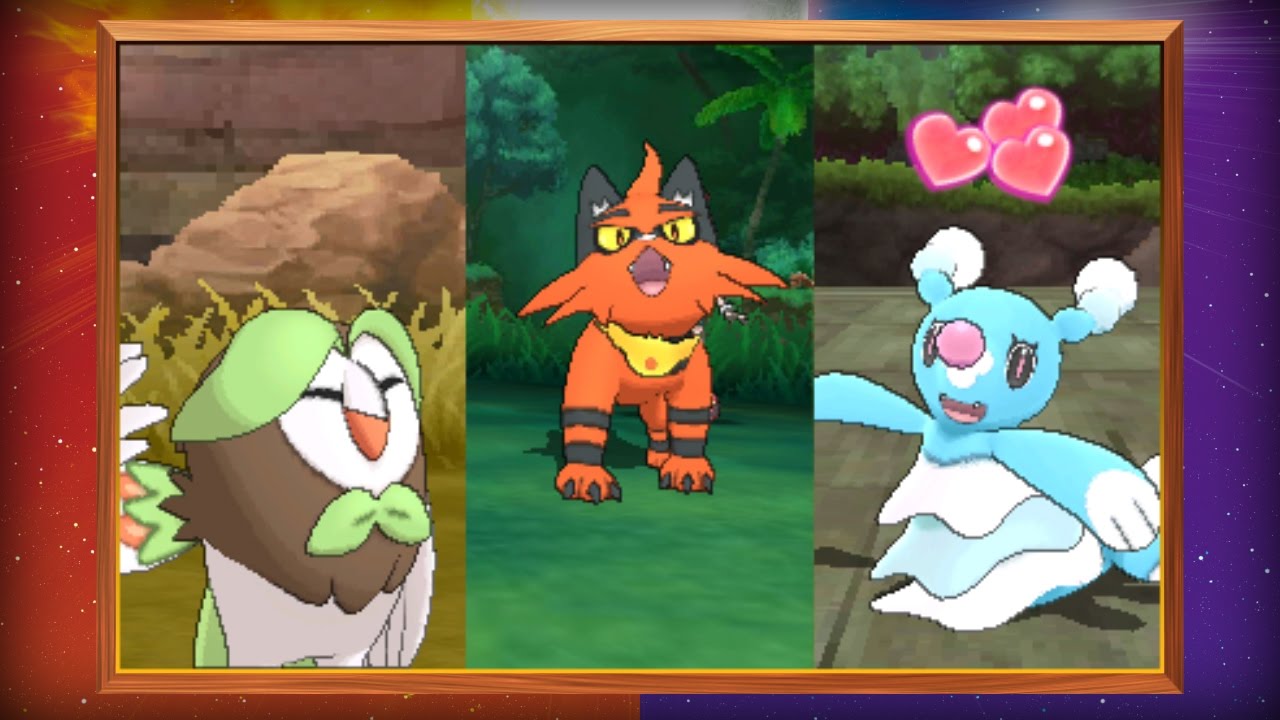 Rowlet evolves into the poindexterous Dartrix who boasts a new haircut, while keeping their old bow tie on for maximum Pokemon Amie adorable action. Litten evolves into the more bobcat-like Torracat, who has a little jingly bell on its collar that’s hot to the touch. Popplio rounds out the bunch by turning into the adorable Brione, who looks like the cutest, tiniest little ballet seal you’ve ever seen.

Knowing how these starters look now also makes some previous leaks for the final forms seem a little more believable as well.

In terms of new features, the trailer also shows off a new “Festival Plaza” and the “Poké Pelago.”

Festival Plaza looks like an overhaul of both the Entralink and Join Avenue features from the Black and White games, coupled with the Wi-Fi rooms from the later generation four games. The idea is basically the same as those systems, you’ll run around this big plaza, telling people where to go for shops to get points and build up said shops so you can reap the rewards; things like clothing dye, Pokémon XP, and more. You can also earn points from doing missions, like capturing a lot of Pokémon, or winning against scripted battles. Some of these missions will be “Global” meaning that everyone who is playing Sun and Moon will be working together to get big rewards. All of these aspects combining into one seem like a great way of solving the issues that plagued them in past series entries.

Poké Pelago is actually an incredibly novel idea. In most Pokémon games, as you build your team stronger and stronger, the Pokémon that fall outside of your preferred six generally end up chewing it up as a sprite in your PC Boxes. The Poké Pelago lets you take those left-out Pokémon from your boxes and place them into a series of islands where they can explore, breath free, and make new friends as you wander off with your chosen few. While on the Poké Pelago, they’ll be able to recruit wild Pokémon to join your party, and farm rare items like evolutionary stones, and more useful held items. This feature seems exactly like the type of quality of life system that helps remove a lot of the boring grinding that Pokémon games can often descend into.

One last aside from the trailer is the implication that yes, you will be able to use mega-evolution in Sun and Moon, but there won’t be any new mega forms for Alola. This is ultimately a good thing in my opinion, as while there were many good mega evolutions, they did end up making certain already strong Pokémon even stronger. It’s at least good to see the ones who already exist won’t be left in the dust.

Outside of the trailer, the Pokémon Global Link site will be updated for Sun and Moon with several really good updates. First, the rating system will be updated to add a sort of, MMR, or Matchmaking Rating. As you battle over Wi-Fi you’ll get points and be placed into various leaderboard positions with ranks, which seems like the type of thing a lot of competitive Pokémon players could get into. Second, there will be new rule types to both make battles more evenly balanced, and quicker, stopping those all-too-often boring stalemates.

The third, and most interesting feature for sure is the ability to “Rent” other player’s Pokémon teams for use in online battles, kind of like how you could in Pokémon Stadium. This feature is incredibly promising to me, not only for someone like me, who tires of making optimal teams, but also for anyone who wants to really try and learn what types of team strategies can really work at a high level firsthand.

Ultimately, all of this news is extremely promising. I’ve said it before, but Sun and Moon really feels like a breath of fresh air, and every passing update seems to support that more and more. We’ll be able to see how all of this ultimately pans out on November 18th, but you will be able to get a taste when a demo drops on the 3DS e-shop on October 18th, which allows for a download of a special Greninja that turns into an Ash-themed form during battle.