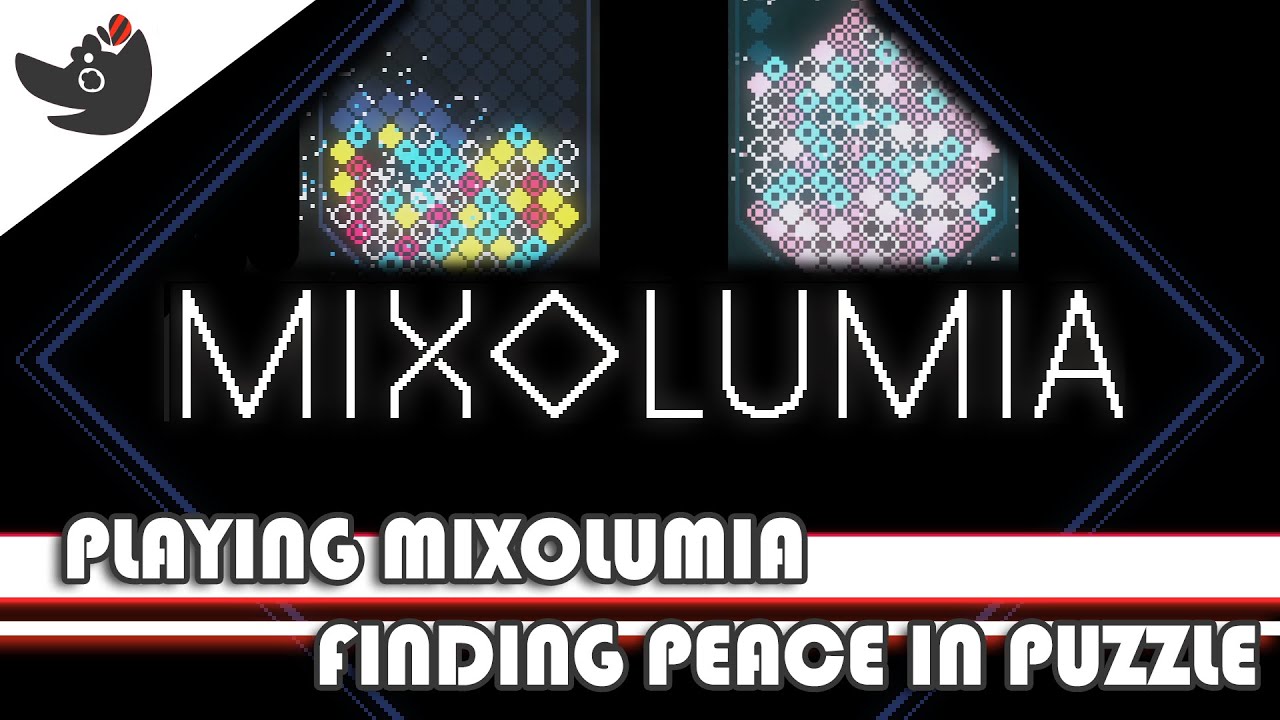 *transcription of video below*

There are so many times when I am lost in life feeling like I have no control over anything. I know that every morning I wake up and try; I spin these little Tetris pieces falling into my life to try to get an optimal situation where I can take control… But lately? At the end of most days I just have to go to bed, reset, and hope that the next day is a little better. Life is just kinda this controlled chaos that constantly drips down onto you– A block in Mixolumia falls and it consists of four colored squares. A little controlled snowball of chaos. And within a snapshot look, I can match one color in the block to another color in my stack and make a matching row of three. That set of three disappears, and the other three color-squares attached to my block settle into the same place I just got rid of things. I’ve essentially accomplished nothing; actually, bump that, less than nothing has been accomplished because I have less control over my stack now than I did before placing that block. But another block of four squares are coming down this diamond alleyway and I don’t have time to pivot my strategy any longer. Maybe I’m stupid, an absolute idiot, it’s a fool’s errand for me to even be playing this game because I can’t even line these stupid blocks into groups of three… Screw it, I don’t care where this block falls, everything’s moving too fast anywa-

Everything on screen explodes and I find a moment of bliss created by my own chaos. A truly happy accident. Breath finds my lungs again and I can breathe. I can’t control anything even when I’m trying my best, but sometimes, once in a while, all the work I’d done up to this point makes sense, it clicks, and everything just slides into place. For this moment things are okay again. And here comes another block.

I’ve played many falling-block puzzle games over the years and none of them have had the meditative quality that Mixolumia has for me. It’s a game that looks and feels exactly like the gifs on Twitter made it seem like it would, and sometimes; sometimes it’s just a little bit more than that. I don’t know what kind of satanic pact the creator made with Math as a child, but there is a sinful satisfaction to how blocks settle into place after a piece is dropped even if it makes no sense to me. The game has five modes of play, none of which would seem out of place in a Puyo Puyo or Tetris game: the main mode with a clear-goal to reach, an endless mode, a time attack mode, a crushing hardcore mode, and a chill mode that removes any failure states or pressuring factors. When you start the main mode, things ramp up quickly and blocks stick into their final placements faster than I’m ever comfortable with. On the other hand though, because it is such a simply-designed game there are only ever four colors to work with and so a cascade of matches is often closer than you realize! The satisfaction of matching colors into lines of three or squares of four in this game combines the auditory craft from Tetris Effect with the feverish aplomb of Candy Crush that creates this serotonin cocktail that has often made me scream out loud with excitement. I don’t know if there is a meditation form that involves shouting, but I only rarely ever find peace such as this within games, or maybe when my local sports team gets a big win.

I keep coming back to this place; every day for the last four days I’ve put in a few rounds. This isn’t like a gacha game or a roguelike where meta-progression is a force to incentivize you to come back. I just keep wanting to go back, of my own volition, to that place that makes my brain feel sparkly. And sometimes it takes one round of the game to do that, and sometimes it takes many, but I can’t stop coming back. At least, not with how the world is right now. I’m starting to realize Mixolumia may have some kind of totemic power or property to it. It’s not a drug, it’s just exactly the artifact that I need right now. Blocks fall, I spin them, and every once in a while I spin them very very correctly. Usually, when I open this game I won’t even touch the sprint mode, endless, or hardcore, even though they are all really cool for different reasons. In any other falling-blocks game I would, but Mixolumia is different for me because I just want one thing and within seven minutes I’ve got a good chance to get that thing: the fleeting rush of control.

Even if I didn’t want that one thing though, I appreciate all the options and customizability of the game. It even has instructions to design and import your own music files and color palettes into your game and make it your own. There are enough options in the settings to rebuild Mixolumia as your own thing. When we talk about controlled chaos, personalizing your chaos always helps to make you feel an attachment to it. When I get to drop blocks in the colors of the trans flag or the Seattle Dragons, it becomes a whole new thing for me to enjoy. This is how I know that within its rapid 1½-year development time, emphasis was put in all the right places.

There isn’t anything more emblematic of emphasis in the right places than in Mixolumia’s  “Relaxed” mode where there is no failure. Your blocks don’t even fall without you telling them to! It’s a practice mode, it’s a good feelings mode, it’s a mode for my grandmother, it’s an “I’m not sober enough to function normally while in quarantine, but I also can’t just go to bed yet because it’s four in the afternoon so I need something to occupy my hands while I listen to podcasts” mode. The relaxed mode in Mixolumia is now one more spoon in my ever-dwindling repertoire of coping mechanisms, and when I need it I have it. No pressure.

I played more Mixolumia today, I know I’m not getting better at it and I haven’t found any secret for beating it, but for whatever reason I’m winning the classic mode more often. Maybe a higher block-dropping power is putting favor on me? This isn’t some kind of game for hardcore gamers because the amount of randomness in how blocks collapse in a stack would be sacriligious in Tetris or Puyo, but maybe that pact with math-Satan can work its way through? I went into Relaxed mode and couldn’t even fill the top of the diamond and clear the screen. These matches I keep making are clearing my stack before I can get to the top. This is healing. For me, I can play this and feel better about myself. I mean, I don’t expect to be in a place where I’m capable of real healing anytime soon. I live in America, I’m exposed to chaos from all sides, but maybe Mixolumia for now can represent that, when the time is right, I will be capable of sorting through this chaos and healing again soon. Healing from, you know, all of this…