August 8, 2018 | by Solon
Octopath Traveler Review
Octoperfect For Traveling
Summary: Simple and surprising, Octopath Traveler has rock-solid fundamentals in every department. It is so confident in its retro style that we can rely on it to be just as great in ten years as it is now.

Video Game Choo Choo is proud to supply our official video review of Square Enix’s “Octopath Traveler” for the Nintendo Switch. Below the video we provide a written version of the review for the textually inclined. 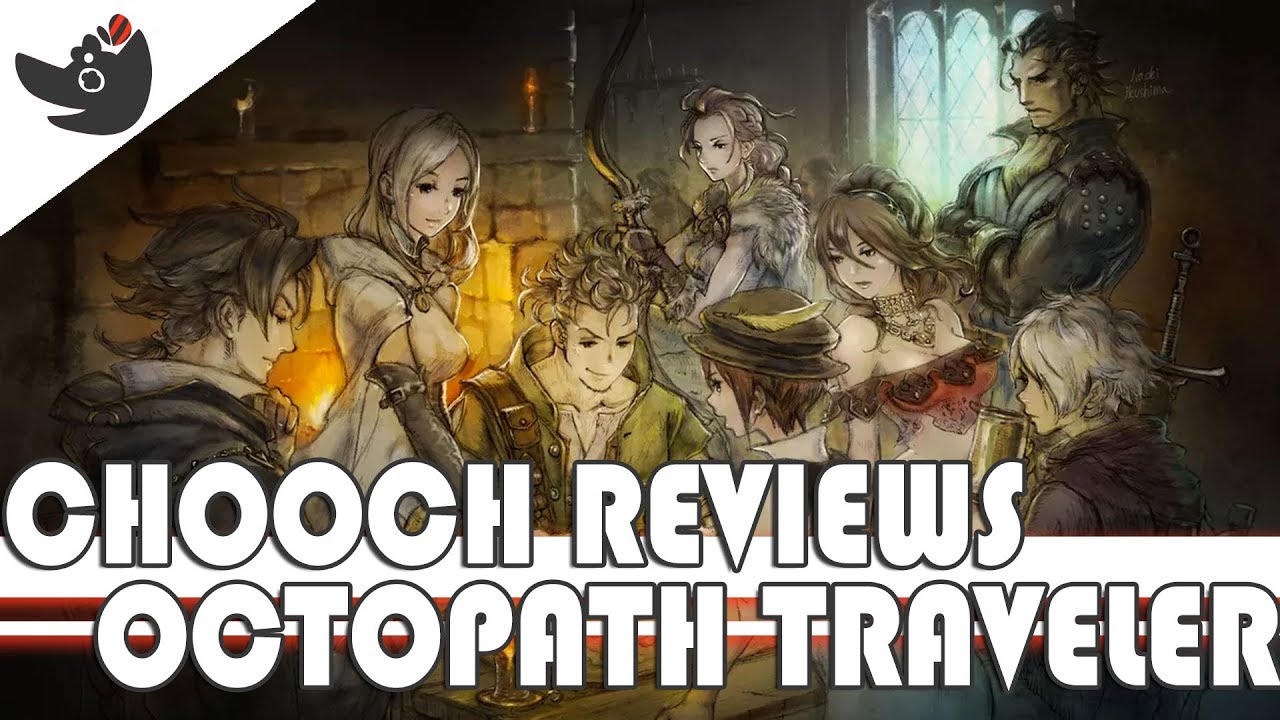 The word Octopus is the first thing you think of when you hear the name Octopath Traveler. You picture eight arms stretching outwards, and that is metaphorically what Octopath Traveler is. Inspired by the stylings of Final Fantasy 6 and developed by the creators of Bravely Default, Octopath Traveler features eight stories of eight people leaving their homes and stretching farther away from their central point, as they travel the wide country of Orsterra. The titular travelers are each consummate craftspeople who are looking for guidance towards personal truths like “Why do I fight?” or “Should I save those who will do evil?” Each character has a journey they are on that is loosely related to each of the other party members’ journeys and they all travel together while following one anothers’ stories like an adventuring troupe or nomadic commune.

Much of Octopath Traveler is “generic”, and by that I mean genre-defining or “representative of its genre”, just like Final Fantasy 6 is generic – it is stripped down to the basics, plainly identifiable, but full of brilliant gems. You travel through an overworld, go into dungeons, fight bosses, and get treasure. The combat system is similarly simple, yet surprising: the way I describe it is that you can get a characters’ strongest ability in about an hour, and then you have another sixty hours to figure out every new way you can break the game with that ability. Meanwhile, enemies will desperately try to prevent you from breaking the game by subtly changing their weaknesses and strengths in ways that will throw you off your game. The graphics are simple and surprising: FF6s gimmick of having tiny player sprites and large enemies has aged well in this game, although sometimes enemy sprites can feel a bit busy and over-decorated. Octopath adds beautiful dynamic lighting and particle effects that helps not only accentuate the combat with explosions of bright colors but also captures moods and temperatures of the world. The beaches sparkle gold, the mountains shiver blue, and the cliffs burn red. Speaking of the world, each NPC has an interesting tiny backstory that feeds into a large generational history of the world. As you travel, you feel like you are fleshing out the world in meaningful and satisfying ways. Each city tells a different story of class struggle or feudal politics based on how it is organized (usually around buildings like a church, a trading post, or an aristocrat’s manor). The cliffs have a caste system built around if you live on top. The port-city built off the inlet is not nearly as lucrative as the port-city built at the end of the peninsula. There are lots of important touches like that, and by the end of the game, I felt like I’d only just started to get to know everyone and I wished there was even more. Octopath is clear that the game is not about a destination, but it’s about the people you meet along your journey.

All of this world-building is simple, but the meta-construction of Octopath is ornate, many parts of it are radially symmetrical from how the cities are organized, with paths of wilderness in between that make up the spokes of a full wheel. If you follow the path, the first four characters you get will always  have complimentary combat mechanics that help teach you the game and the last four will always fill in a specific gap you didn’t know you were missing, regardless of who you start with and which direction you travel the game in. citation: @moomanibe Finally, if you follow all the main quests in level-appropriate order you will be traveling in a circle that spiders outwards from the eight main cities like tentacles extending from the main body.

The music is also suitably simple in construction with overworld music, battle music, and victory fanfares that evoke a level of drama inherent to the style of game but they loop so often during fights or long cutscenes that you may forget that there is music playing. It isn’t bad, it always sets an appropriate mood, and it is well orchestrated, but it is probably the least interesting part of the game due to how explicitly functional it is. There is this really cool flair where each character’s motif instrument transitions the cutscene music into the boss battle. It’s a nice touch and it makes me wish there was a few more nice touches like it. Speaking of exciting noises, the voice acting in the game is rich and fills the palette of otherwise generic sound effects and background musics. Also it’s helpful to understand how to pronounce the more exotic spells like “Sealticge’s Seduction”.

Octopath Traveler is probably the most accessible retro-style JRPG I’ve played, you can do any main quest on your map at any time, and also go visit any city in the world whenever you want. Even endgame cities are available if you don’t mind traipsing through hostile territory, which doing so rewards you with the fast-travel option to that city for later. But that accessibility comes at the cost of it feeling staid or unadventurous to fans of the genre who may be looking for something new. Once you realize that each of the eight characters has four chapters and each chapter takes about an hour and a half to complete, you can do the math and start clocking in exactly how long it will take to complete the game. Tasks might feel rudimentary if you aren’t taken in by the stories or the combat. This is most obvious in the dungeon designs, as every dungeon is constructed to be a nearly unobstructed straight line from entrance to boss-fight, and the only reason to leave that line is to pick up the plentiful treasure chests dotting each dungeon. This could seem uninspired or even boring to some, but for me that’s the cost of something I’d consider to be cutting out the bullshit of JRPGs. I don’t need to fight the same set of four frogs to prove that I’m ready for a boss fight, but at the same time, if I want to, it is there, and I’ll still be rewarded for doing it.

That said, the accessibility makes Octopath what it is. The Nintendo Switch works with its portability, the television-esque serialized segmentation of the story makes it easy to play in short bursts, and the world is engrossing enough that I spent podcast-episodes of time grinding and sidequesting just to further explore it. The combat system continues to comfortably evolve over the 60-80 hours so it doesn’t feel tedious. The stories vary in tone ranging from Tressa’s cute kid’s stage production of The Wolf Of Wall Street Jr. to Primrose’s much darker “Kill Bill, but also she’s a sex worker who kills her own pimp.” Each story steadily gets more intricate until they each culminate into grand finales where stories’ themes resonate with one another in juxtaposition. It was overall a satisfying and enriching experience.

Octopath Traveler is quiet, soft, and confident. It isn’t trying to be an epic game-of-the-year JRPG, but it raises the bar for all retro-inspired JRPGs with its accessible combat and storytelling, bright presentation, and consistent themes. The most important thing about Octopath Traveler is that it is one of those rare evergreen JRPGs, I would put it in a league with other strange JRPGs like Legend of Mana, Eternal Sonata, and Super Mario RPG all of whom were similarly criticized at the time for the pacing of their stories being too linear or not linear enough. But the common thread is that all of these games were good, are still good, and will be exactly as good ten years from now. They are evergreen, and that is why Octopath Traveler has earned a 5/5