It’s been more than a hot minute since the last Nintendo Direct, and with the release of the Switch more than a month past, people have been left wondering just what Nintendos been planning for the consoles future. While Nintendo definitely had some news for the hungry early adopters, they were not remiss in covering their plans for 3DS releases as well, and boy howdy, was there a lot of little news.

While the Switch may be the new hotness everyone is going wild for, the 3DS and its incredibly large install base, are no pushovers either. Nintendo had a long list of this years releases to talk about so I’ll run them down real quick.

The Pikmin 3DS game now has a name and a release date. Hey! Pikmin, the 2D platforming take on Captain Olimar’s wacky adventures with those lovable walking plants will be coming out July 28th, along with an amiibo featuring each of the main colors of Pikmin.

If you can remember any of the last few directs you might remember a game called Miitopia, a weird RPG hybrid between one of the streetpass plaza games and Tomodachi Life. Well it’s still coming, though there isn’t a real set release date. It seems Nintendo mostly wanted to remind people that, yes, it did in fact still exist (which is good because I had completely forgotten).

RPG Maker Fes is a piece of software that allows you to design your own rudimentary RPG, complete with dialogue options and map layouts. While it may seem overly simplistic, the real benefit of the 3DS release is that a separate tool will be launching on the E-shop for free that will allow anyone from owners of the full game to interested purveyors to download games that players have been made. While you’re unlikely to find any Final Fantasy or Dragon Quest quality offerings through this, it’s neat to have an option that will really let anyone see what someone else has made.

Ever Oasis, the interesting RPG from Grezzo and Koichi Ishii now has a release date of June 23rd, though not much was shared outside of that.

In terms of localization, there were quite a few older titles that have been announced for releases outside of Japan. Yokai Watch 2‘s definitive edition, cutesy RPG Monster Hunter Stories, and turn based strategy card-game Culdcept Revolver are all slated for release this fall on the 3DS, with Culdcept having a solid release date of August 29th.

For E-shop exclusive releases, there was information on Fire Emblem Echoes: Shadows of Valentia’s downloadable content offerings, including a season pass, and Bye Bye Boxboy, the final game in the Boxboy trilogy is out for download today, with additional bonuses for players of the first two series entries.

Kirby’s 25th Anniversary is this year, and Nintendo is pretty much exclusively celebrating it on the 3DS with three new games.

Out today, Team Kirby Clash Deluxe is an improved edition of the Team Kirby Clash mini game from last years Kirby: Planet Robobot. Now its own game, you can mash away as four differently colored and powered Kirbys in this free-to-start e-shop exclusive. Another Robobot mini game is also getting an expanded release with Kirby’s Blowout Blast. Based on Kirby 3D Rumble, it will be hitting the e-shop this summer.

There’s also a new multiplayer action Kirby game in development for this holiday, but Nintendo was a little tight-lipped on details surrounding that.

The biggest news for the Switch was far and away about Splatoon 2, though that’s not saying much. Slated now for a July 21st release date, Nintendo ran down a couple odds and ends about the highly anticipated follow-up. First, they showed a new game mode reminiscent of Firefight from Halo, or Horde mode from Gears of War. As a team of four inklings, you have to fight off wave after wave of mutated marine life to collect “Power Eggs”, which will in turn, earn you different types of currency and goodies. While it’s nothing revolutionary, it will definitely be fun to have more than one game mode to fool around in, especially one that’s less competitive, more cooperative.

After that reveal, new Splatoon 2 amiibo were shown off and, if you can remember what the original Splatoon‘s amiibo looked like, you can probably take a wild guess as to what the new ones might be.

They might not be that original, but damn if they don’t look fresh.

What’s less than fresh, however, is what Nintendo’s planned features for these new amiibo are. Something plenty of players wanted from the original Splatoon was the option to save different clothing sets and weapons together, so they could swap freely without having to slog between individual menus each time they wanted to mix things up. While Nintendo is responding to this criticism with Splatoon 2 gear sets, the only way to access this new feature is through scanning your Splatoon amiibo. While amiibo from the first entry will also get you access to this feature, the precedent of locking such a basic feature behind a separate purchase for a full price game is an incredibly dangerous one, that leaves me more than worried for what the next few years of a more internet-minded Nintendo might have in store.

Outside of Splatoon 2 there was a lot of smaller news. Monopoly will be getting a Switch release this fall, with the highest definition dice rolling you could possibly conceive. If you’re a degenerate who loves to sin, Fate/Extella‘s weird musuo-style game is coming out on July 25th so you can make sure everyone sees anime ass on the train, at the library, or wherever you can think to take it.

Namco Museum is a collection of old Namco games like Dig-Dug and Pac-Man, and while it may not have the rich polygonal presentation of the Namco Mueseums of old, it will feature several Xbox Gameroom style challenges and bonuses whenever it comes out in the ambiguous summer.

There were quite a few ambiguous summer releases actually, with Rayman Legends Definitive Edition, Payday 2, Sina Mora EX, Battle Chasers: Nightwar, Kirby Crystal Shards mini game inspired Project Mukuru, and plenty of Neo Geo games all coming at some point over the next few months. While it’s concerning that such a large amount of scheduled releases are without a date, I’m at least taking some solace that they are at least announced to exist.

Nintendo did have a few known quantities to be fair, with a hefty spring lineup. Disgaea 5 Complete will be getting a demo at some point before its May 25th release, and Puyo Puyo Tetris has a demo out today ahead of its April 25th launch. The enhanced Mario Kart 8 release, Mario Kart 8 Deluxe, is finally scheduled for April 28th, with its new battle mode and improved online features. You’ll also be able to get rough and tumble with Evil Ryu and Violent Ken in Ultra Street Fighter 2: The Final Challengers when it comes out on May 26th.

Minecraft will also finally be making its Switch appearance alongside the Super Mario Mash-up pack on May 11th, which, I mean hey, you want Minecraft on the go, and you somehow hadn’t had access to something like that before, go for it.

The only other known date Switch release for the near future is Nintendo’s new multiplayer battle game Arms, which will be launching June 16th. Nintendo showed further details, there weren’t many new to be had, with a short demo being pretty much the only thing shown off. While it’s interesting to see how customization will work in the game- players will be able to choose different arms for each character to mix and match the abilities of both- we won’t really know just how fun Arms is until the average gamer gets their hands on it. 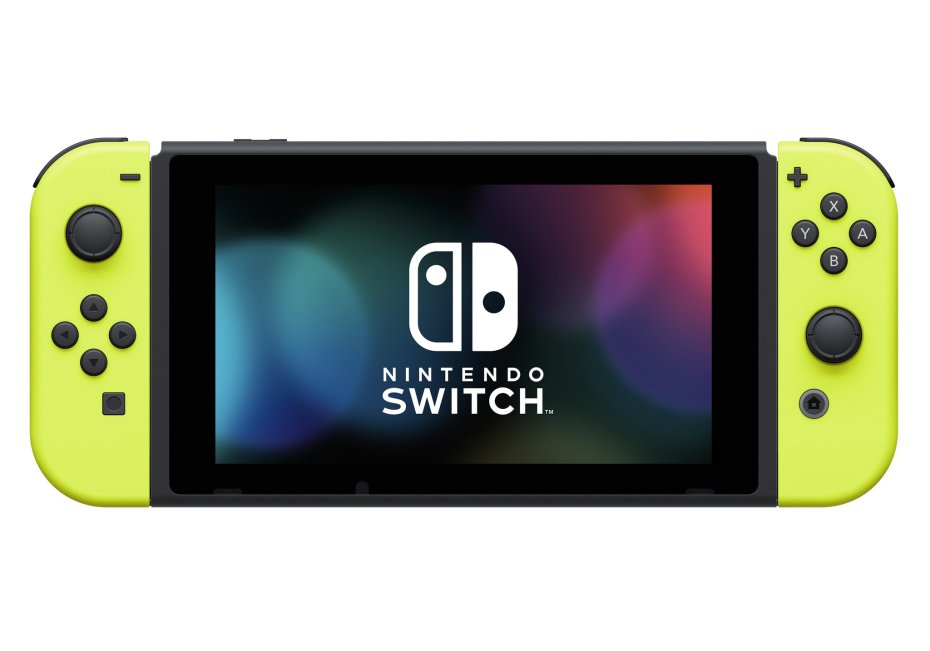 Nintendo announced a few things that weren’t digital as well.

Starting May 19th you’ll be able to buy a second standalone Switch dock for $89.99, though they’ll only be available in limited quantities. You’ll also be able to buy neon yellow Joy-Cons alongside a new battery pack controller accessory alongside Arms’ release in June, which I’m sure will be much appreciated.

In the world of amiibo Nintendo also announced that the last three Smash Bros amiibos for Corrin, Bayonetta, and Cloud Strife will be releasing on July 21st, with each getting their own alternates as well in the form of a male Corrin, an original-style outfit Bayonetta, and Advent Children clothed Cloud versions respectively. There will also be three Zelda series amiibos for Majora’s Mask Link, Skyward Sword Link, and Twilight Princess Link coming on June 23rd.

If there’s one thing I’ve been noticing about Nintendo recently it’s that they have no real good idea of what to do with their own IPs.

While Hey Pikmin!‘s quality is up in the air, I’m left wondering, just as I did with Chibi Robo, why they would take the inventiveness of that series’ core gameplay and stipend it down to a generic 2D plane. While Kirby has always been mixing it up over the years, I’m also questioning why the planned releases to celebrate a 25th anniversary, are by-and-large glorified mini-games.

While the Switch itself also had a successful launch, the amount of wholly original games lined up over the next year can be counted on one hand and though yes E3 is right around the corner, not getting any more information about Mario Odyssey or Zelda DLC plans leave me worried if they actually have anything else lined up in secret.

It’s tough to figure out though, whether to worry about all this much at all. The Switch is a weird beast, plenty have bore witness to its successes in the public as a handheld, and plenty of people seem all to willing to shell out the money to play older games on the go. As we move forward past the Switch’s launch, I’m mainly left worrying about priorities. Arms could be fun, but Nintendo hasn’t really been demoing it in a fun and interesting way like they did Splatoon, but they seem to be expecting it to do just as well.

Ever since the Wii U was deemed a failure, I’ve been left asking a lot of “how”s and “what”s at Nintendo. How will they manage to improve? What will they do to get back to the highs of their past consoles? This direct didn’t give me any answers there, but it is nice to see a stronger line up than what we saw around this part of the life cycle for the Wii U. At the very least Splatoon 2 looks good, and we can all take solace in that.