January 12, 2019 | by Solon
Kingdom Hearts Re:Coded Is A “Must-Watch” Before KHIII Comes Out

In preparation for the imminent release of Kingdom Hearts III, I’ve been diving deep into as many of the Kingdom Hearts games I can. As I’ve spoken to fans of the series, they’ve been very patient with my questions, offering assistance with my quest to be ready for KH3. Strangely, they’ve almost universally advised me to skip one very specific entry to the series. “Kingdom Hearts Re:Coded [is] the most skip-worthy entry in the series” was Game Informer’s official sub-header for the game. Likewise, Gamespot summed up the game’s narrative as “tepid”. With this much disgust towards a game whose central franchise basically built the framework for modern “cinematic universes,” I absolutely had to see what was going on here for it to be considered “The Worst.”

Kingdom Hearts Re:Coded does a thankless job of cleaning up after the five other Kingdom Hearts games that preceded it. It is a game about carrying the burdens of others, while also being built out of the burden of being a Kingdom Hearts game trapped between mainline games. I’m fascinated by how despised it is within the culture because deep, deep inside of it is exactly what every Kingdom Hearts fan is always asking for: closure.

Like many Disney heroes, Kingdom Hearts: Coded was cursed at birth: nobody ever asks to be born into mobile game development, it just happens to people. Not only was it cursed to be developed for phones in a time when the iPhone was an infant, it was also somehow developed with 3D and 2D engines for multiple widescreen, and standard definition formats in order to match myriad phone screens. That is a nightmarish standard to reach nowadays for mobile development, so I can only imagine the horror of developing this back in 2008. If that wasn’t enough, it was also released episodically as an experiment to tell a “fluid” story over a Kingdom Hearts-specific container app in Japan.

From what I understand, series director Tetsuya Nomura was ‘absolutely off his shit’ with this idea and co-director Hajime Tabata was too busy laughing with tears in his eyes to stop him from developing a living trainwreck. Kingdom Hearts desperately needed “recoding”, to say the least. The full compilation of every episode finally came out for the US in one package in 2010 as Kingdom Hearts Re:Coded for the Nintendo DS. The reception of the game was miserable! Hardcore fans of the series found nothing new or novel in the game’s approach to storytelling as it was the third time they rehashed the events of the first Kingdom Hearts game, and casual fans found the gameplay repetitive and dull as it recycles the same setpieces multiple times. That’s how we end up with “the most skip-worthy entry” in the Kingdom Hearts series.

Re:Coded is a simulated retelling of the first Kingdom Hearts, featuring virtual dolls of Sora, Riku, and all of their friends. There are multiple points of retconning inside of the game where Virtual-Sora is deleted and re-compiled, losing any memories he’d made along the way. Fans hated this! It feels like sloppy writing! Since the game’s setting is all a fake simulation, there are no stakes to Virtual-Sora succeeding or failing throughout the game, and we are told multiple times that this Sora is not real and will not retain any of his memories throughout the adventure. On its face, this sucks all of the drama out of the game, which is really bad for a franchised centered around the interpersonal existential drama, but it actually accomplishes something important.

First, this process of virtualizing the drama lets Sora finally get some rest. Let Sora rest, y’all! Mickey and the gang can solve their own record-keeping problems for a game! Also, because Sora is virtual, it makes the most important scenes of the game  more honest. Through the entire second act of the Re:Coded, Sora and Riku actually get time to break down their feelings for one another. Sora looks at Riku with virtual eyes, neither of them being real and neither carrying the baggage of the events of Kingdom Hearts 1, and says to him, “Riku… You gotta stop doing everything by yourself. … I like getting dragged into your messes.” It’s honest, unguarded, and all that anybody has ever wanted from playing the first Kingdom Hearts game: Riku and Sora reconnecting as friends. Simulation or not, these are the honest feelings of both characters!

The importance of this virtualization is seen again at the climax of the game when Sora confronts Roxas. In reality, these two characters should never be able to meet, as Roxas only existed for a year of time while Sora was in a coma between the events of KH1 and KH2. However, thanks to the power of ~The Internet~ we get a virtual Roxas finally confronting Sora. Historically in the series, Roxas has been a manifestation of Sora’s rage and fear of loneliness- and during the final act of the game he finally gets to take Sora by the scruff of his smug vest and personally test his resolve. Can Sora really stand up on his own two feet without “the power of friendship” always being at his beck and call? If Sora were truly condemned to the heartache of losing someone he cared about like Roxas was, would he succumb to the darkness by forgetting about them? Or will he carry that pain with him forever? Sora is trapped, as he can’t deny the pain of losing his friends and he can’t deny his friends to absolve the pain – both paths lead to darkness as Roxas found firsthand. Personally, I wasn’t prepared for Virtual-Sora’s answer to this and it is why I had to write something about it in the first place.

Roxas pushes Sora towards an answer by coaxing him,

“That hurt [of losing your friends] will drag you down into the darkness. You have to get rid of all of it!”

“No, I don’t,” Sora responds, “I can keep the hurt, because it reminds me of something important. It’s all that I have. It’s what holds the pieces into place. I accept that.”

Friendship is a powerful force in all of our lives, it lessens the burden on everyone, but to lose friendship is to gain all those burdens and more. Roxas demands denial of these burdens to salve the pain, but Sora makes a compromise when he says the hurt reminds him of something important. “It lets me know that what I’ve forgotten is crucial. It will stay inside my heart until the day I remember.” As long as Sora carries the burden of friendship, even if he’s lost his friends, they will eventually return because they carry that exact same burden. It’s a wild leap of faith- so wild that Roxas denies it can even happen, but it also makes perfect sense.

Do you have any friends that you’ve grown distant from? Like old friends from school, or acquaintances that you met in passing whose company you really enjoyed, maybe even an old Twitter mutual that you haven’t pinged in a while. You might never connect with them again as you may have both now lived completely divergent lives at this point, but that doesn’t invalidate that they were special to you at one point. Likewise, if you valued that relationship, then they will undoubtedly value you in a similar way. Even if you forget about them completely, and they forget you- it doesn’t diminish the fact that your history together is still valid and your spirits are still intertwined. That’s why the pain of loss is so important; that heartbreak we feel is a reminder of the strength of our relationships. Mickey Mouse taught me that- Kingdom Hearts Re:Coded, the worst game in the series, taught me that. A virtual doll version of a clown-shoed teenager speaking to a likewise virtual soul-copy of that same character who shares an anagram of the same name taught me that.

Obviously, the metaphysics of this game are messy, but if you take a step back then Kingdom Hearts Re:Coded is a vital entry in the series because it officially puts Roxas (358/2 Days), Mickey (Birth By Sleep), and Sora (KH1 & 2) in the main room from Kingdom Hearts: Chain of Memories to do the ugly, tireless job of connecting all six of these largely disconnected games’ canons together. Even though the events are ‘virtualized’, the lessons are real, and Mickey canonically passes all of these stories to Sora through a physical journal. Re:Coded isn’t clean or great by any means, but I was inspired by it and now that it’s in an easily digestible three hour movie (and you can set the first half to 2x speed), anybody who is prepping for Kingdom Hearts III at the end of the month can be much more ready. Of course, it still may be the most skippable game in the franchise… if you’re a heartless! 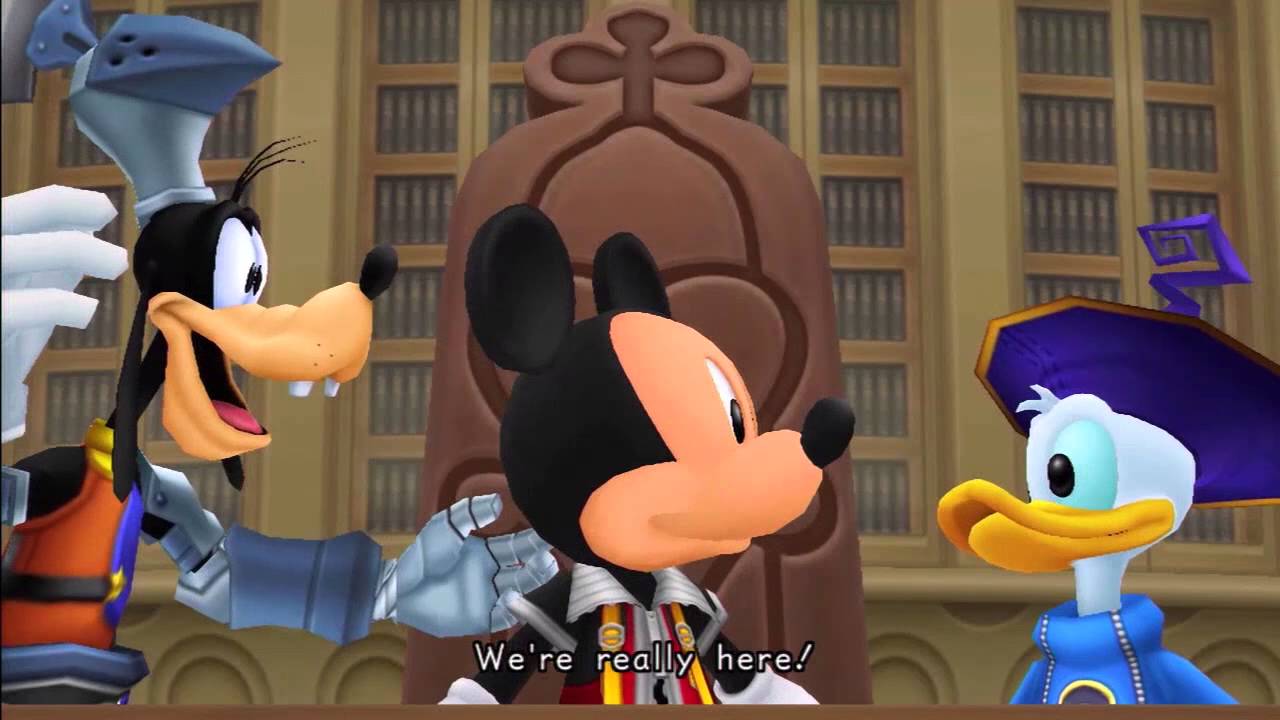