September 5, 2018 | by Solon
Imperishable Memories Review (Video)
Memorable, But Perishable
Summary: Imperishable Memories is an hour long tour-de-force in world building with cool characters, inspiring settings, and style to spare, but the gameplay leaves something to be desired.

Imperishable Memories is a side scrolling shooter made by Jennifer Raye about a boy who needs to apologize to his now ex-girlfriend for hurting her. Before he can do that, he needs to unpack all of his previous emotional baggage to understand to what extent he is broken before he can appropriately comprehend how she has been hurt by him. Much of that emotional baggage has physically manifested and wants to destroy him. Some people drink to forget, whereas others jump on their hoverboard with a laser gun screaming “I Must Destroy The Past” at their own psychic projections. Coping is an art more than a science. 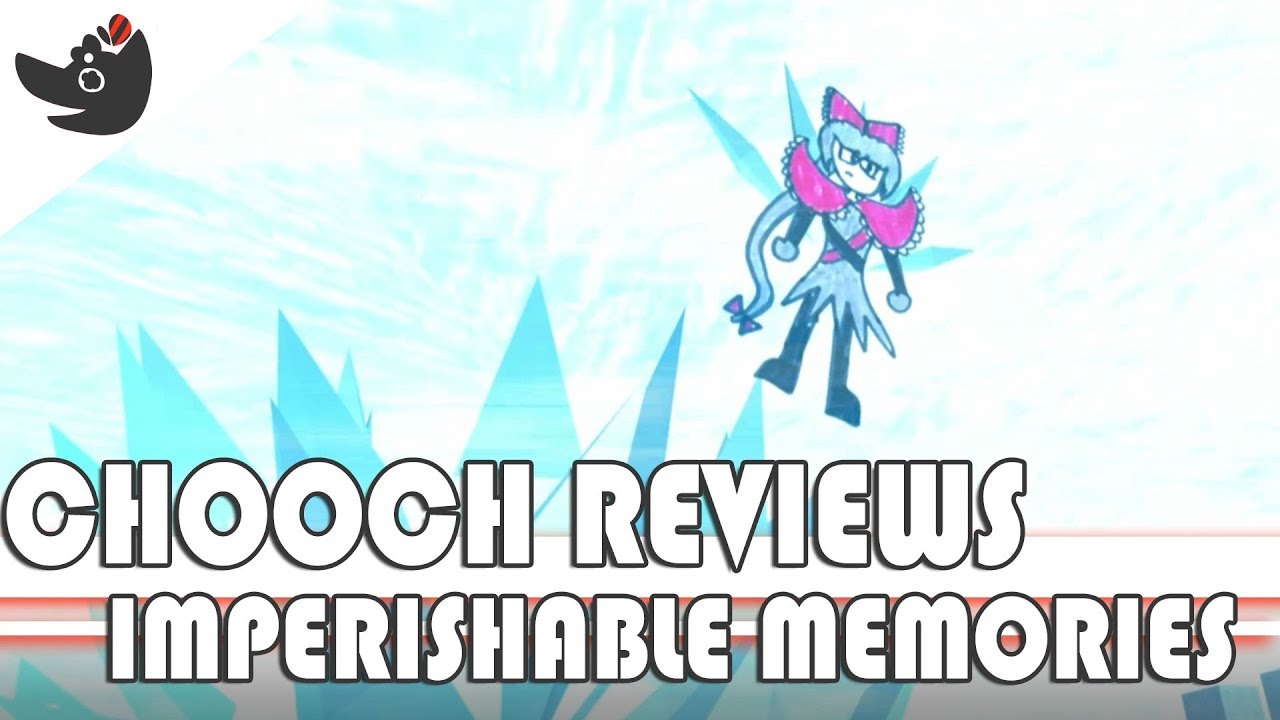 Imperishable Memories starts in an apocalyptic place and manages to escalate chaotically through multiple dimensions and fragmenting realities. The unstable tone is a good metaphor for the game as Imperishable Memories tries to be a lot of different things with varying success.  The game opens with your best friend stabbing you in the back and attacking you with skyscrapers, and then by the end a normal thing you do is dodge dimensional vortexes while under attack by your latent subconscious manifestation of jealousy. It is incredible how much emotional gravity is packed into such a small space. You’re looking at crude coloring book drawings that are shooting simple orbs at each other as something akin to the plot of Inception is unfolding all around them. The ornate style is most plainly obvious in the 3D backgrounds that wildly swirl around the player. Each of the game’s nine levels do a great job depicting the main character’s odyssey through his own subconscious, as each space feels uniquely deep. Sometimes you are flying between kaleidoscopic dimensions, other times you are going into the inner sanctums of large castles. There were times when I felt lost in the story because of the rapid pace everything was at, but the settings were so consistently solid that in the end I was able to keep up by following along with the story told by each zone.

The pacing of Imperishable Memories is fickle. The story begins in medias res, but then repeatedly shifts chaotically from what is already an uncomfortable spot before we have a chance to feel settled or grounded. It also, somehow uhh… ends ‘in medias res’ right after identifying a few funny plot holes and so you’re just left hanging when it ends. Since the game is only an hour long, it is very petal-to-the-metal, and as interesting as that is for how it handles storytelling, it rubs contrary to how each level is designed. Each level follows a similar formula; you shoot for a bit, you dodge bullets, there’s a cutscene, a big warning flashes, there’s some conversation to introduce the boss of the level, you fight the boss for thirty seconds, and then the boss dies. While the presentation is chaotic and interesting, that formula is the same for every level. Even down to the final boss fight also being screens where you simply survive for exactly thirty seconds. This becomes a fascinating inconsistency for Imperishable Memories. The story spends it’s time reiterating your rampage through your subconscious, but you can spend most of every level sitting in the bottom corner not firing a weapon or doing anything. Because of how the game is programmed, you don’t ever have to shoot a boss which makes the boss’s health bar essentially meaningless.

I’ve gone for low-score runs of the game and you can finish levels with zero points, which is a cool facet of the game but with how cutscenes play out, it does not seem like Imperishable Memories was intended to be played that way. Let’s talk about how it was intended to be played though, because this game has very simple controls. You hold a button to shoot things, and you hit another button to throw enemies straight forward. All energy from the player character is a straight line in front of the player with two notable exceptions; when you can use an enemy as a power-up to gain a spreading triple-shot, and when your bullets bounce off of walls. These moments never felt like they were capitalized on properly since they were random events in the middle of early levels. Because throwing and shooting things are in the same direction and trajectory, there really isn’t a strategic reason to throw enemies instead of always holding the shoot button down. There is a score difference, but the lack of variety makes the shooting quickly feel staid. You also have unlimited lives within story mode, so there is no fail state further than dying and immediately respawning, which feels counter-intuitive to a subgenre of game all about the penultimate fail-state of a game over. By the end of it all I was asking: why is this a sidescrolling shooter? If the game state isn’t affected by whether or not I shoot, nor whether or not I move, then why am I here? Probably the most unintended consequence of this is that if you don’t do anything at all, other characters will still forgive you for hurting them and act like you’ve overcome a lot and are now changed as a person, which ironically is a pretty great representation of how people bend over backwards to forgive toxic people who’ve simply compartmentalized how they’ve treated others.

This has taught me a lot about how systems interact with each other to create new meanings, because Imperishable Memories does a lot of critical work deconstructing the shoot em’ up subgenre by making it more accessible. There are no more life limits. You can use your grab ability to block incoming enemies and enemies will line up in predictable patterns. Boss battles are very short so as to not get in the way of telling the story. In many games of other sub-genres these would be groundbreaking steps being made. Not all games need to be challenging, but I think that there could be a lot gained in Imperishable Memories from diversifying the win and loss conditions within levels.

Imperishable Memories is a huge swing for the fences, and I don’t feel like Jenn hit a home run with this one, but she goddang belted a foul ball right out of the stadium. There is potential here that I feel is worth $8 on itch.io if you are interested in niche indie games that are short, reflective, and mash together multiple art styles in quirky ways. If you want to see a creative designer making big steps in their craft right in front of you, this might be your thing! I feel the problems in this game will turn people away, but also that making changes could have cascading effects on the overall tone of the game, a tone that I think is special. I would especially love to see a remastered version of this game far in the future, because this is the kind of modest starting point that makes following game designers really special. The game has a voice all its own, as it builds a surreal sci-fi ensemble story in only sixty minutes. The game also steadily feels more confident in itself level-by-level. That makes me really excited to see future work by Jenn Raye. This is a modest stepping point forward towards amazing things and that is why Video Game Choo Choo gives Imperishable Memories a 3 out of 5.