March 28, 2020 | by John
Doom Eternal (PS4) Review
Heavy Metal Thunder
Summary: Doom Eternal isn't Doom 2016. It's another new take on the storied franchise that plays completely different and wants something more from the player. If you find joy in juggling many meters and always feeling a second away from death, Doom Eternal is your game.

The legendary Doom franchise has rarely faltered. Hell, the “bad” one, Doom 3, is just mediocre overall. Doom 4 was almost a disaster, falling rank and file with Call of Duty before pulling up out of a nosedive to produce the modern classic Doom (2016). It’s now four years later, and the true sequel to 2016, Doom Eternal, has hit, and it seemed like a lay-up: do Doom 2016 but more, and that’s all we need! Id Software didn’t rest on their laurels, however. Doom Eternal takes the basic gameplay and flow of Doom (2016), and chops and screws it to (mostly) great success. Experimentation in video games is probably even scarier than Hell itself, but Id pulled it off!

Generally, Doom Eternal plays like 2016, but layers have been added, like frosting on top of an already delectable cake. Doom Slayer still moves the same and shoots the same, but his arsenal has been expanded. The chainsaw, previously a quick “I need ammo,” get out of jail free card item in 2016, a game with rare ammo pickups, is now a staple of your repertoire and refills with one tick of use after a moment’s wait. A flamethrower has been stapled onto the Slayer’s back, allowing for quick damage-over-time occasionally as well. Both of these items are far more like utilities than just fun new weapons in your arsenal. Ammo is scarce, not just in the map but in your pockets as well. Doom Slayer only starts with around 16 shotgun shells, and each upgrade to your ammo only bumps the numbers up a few notches. You must use the chainsaw to keep your ammo supply full, lest you find yourself fighting a specific foe that is weak to a weapon you’re lacking ammo for. Similarly, the flamethrower makes enemies dole out shields, and glory kills (the returning mechanic of staggering foes and finishing them in gory, spectacular fashion) refills health. Juggling these mechanics as well as enemy placement and weaknesses is the name of the game in Eternal, and that’s one of the game’s divisive aspects.

Doom 2016 was a power fantasy. As you progressed, Doom Slayer went from a strong, yet not completely overpowered character to “if I look at a demon the right way, they will just pop like a balloon.” That is not the case in Eternal. In Eternal, the Slayer is always seconds away from death. If you’re not constantly switching weapons, using the chainsaw, flamethrower, and glory kills, as well as keeping tabs on what enemies you’re facing to focus on their weak points, you are going to have a rough time.

This is going to divide people, but I personally enjoy both styles. Doom games make you feel powerful but can also make you feel just as vulnerable. 2016 was a bit different but in a good way. Eternal is also different, from both the original Doom games and 2016. If you’re expecting the same thing, you might be disappointed, but Eternal has a unique, character-action-esque challenge that works very well. The early goings are a bit too difficult, however, as a lack of weapon variety ends up limiting your ability to battle without pausing and waiting for a weak enemy to spawn so you can chainsaw them before hopping back into the fray. Once you have a few weapons in tow, the way Id wants you to play clicks, but it’s incredibly frustrating early on. 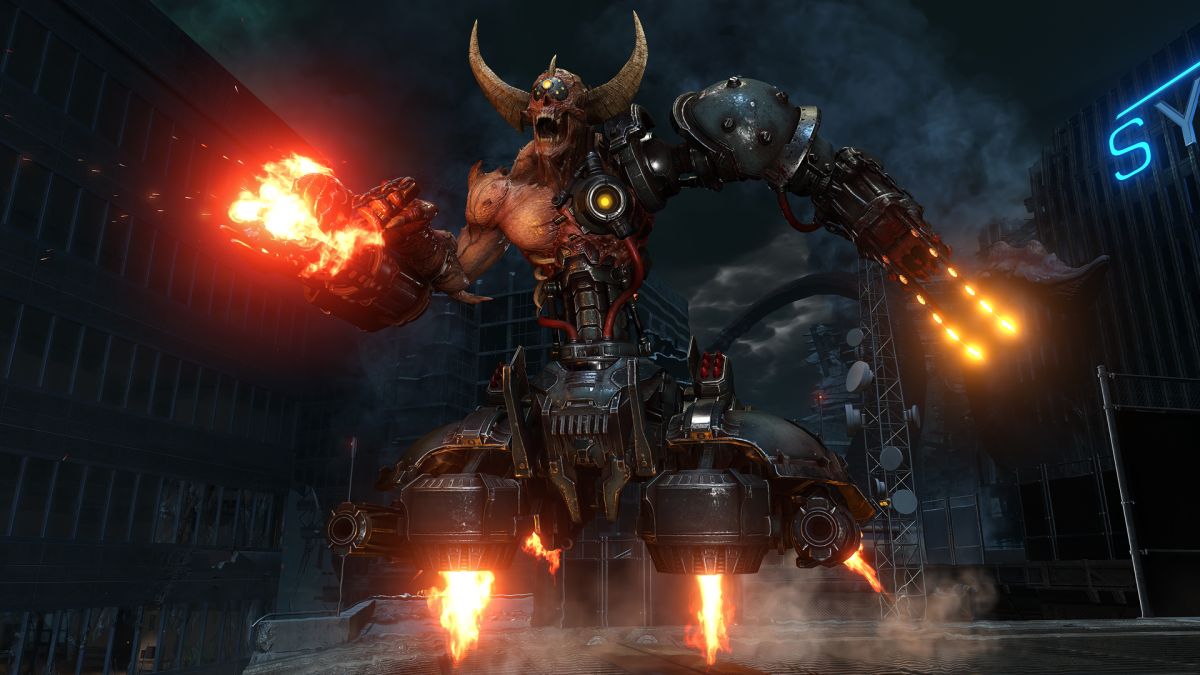 Enemy variety is king in Doom Eternal. As soon as the player enters a room, demons spawn in and your first thought is usually “alright, what weapon do I need to equip, what weapon needs to be in the quick-swap slot (you can tap a button to switch to your last weapon, and that can be useful in certain situations), and where are the fodder enemies so I can kill them for health/ammo?” The first two questions are answered based on what demons you see, as each one has specific weaknesses the Slayer’s arsenal can exploit. For example, the Mancubus, a rotund demon with guns for arms, can be disposed of easier by focusing fire on their cannons to lower their firepower. Weapons with small, targeted attacks do well against them. Other examples are a bit more obvious, such as how the Cacodemon goes down by lobbing a grenade into its wide gullet. The orb was hungry, and you fed it. The previously mentioned issues with juggling ammo counts can get annoying with these weaknesses in mind since if you’re running low on something and need it for a specific foe, you’ll have to break off from combat to slice through a mook. It’s another bump in the road to get used to, and a potential deal-breaker for some. As long as you’re attentive and remember each demon’s weak point, combat flows evenly and every weapon is important. Or you can just run around spraying the rocket launcher and hope for the best, which only works half of the time. Trust me, I’d know.

Things get easier for the Slayer as you unlock new upgrades, of which there are many. Each weapon has two mods, which give you different abilities such as a zoom sight, sticky grenades, and much more. Each mod can be upgraded to work better, and fully upgrading the mod allows you to activate a challenge to get an even better version of that mod. Doom Slayer’s suit can also be upgraded, which mostly lowers the cooldown on abilities. I recommend focusing on making it easier to dash in the early game (yeah, Doom Slayer can dash now!) so you can dodge enemy fire. There are also runes you can equip, and much like 2016, these let you perform actions faster or otherwise interact with things in an easier way. This layers on to your previous skills, making fights a bit more attuned to your playstyle. It doesn’t let you fully build Doom Slayer into a new character, but if you like having more air control instead of faster glory kills, you can do that.

On a similar topic, Doom Slayer’s arsenal is a delight. There are shotguns, of course, but there’s also the classic plasma rifle, the rocket launcher, a ballista cannon, and of course, the BFG. Growing attached to a single weapon is almost impossible, as each individual combat room asks the player to use new combinations of guns and other weapons to clear out the demonic invasion. Grenades are also a factor, with both frag and ice (!!!) grenades spicing up combat.

Aesthetically, it’s inarguable that Doom Eternal knocks it out of the park. Instead of the two themes of “space facility” and “Hell” 2016 had, Eternal mixes it up nearly every level, with the Doom Slayer traveling to different locations on Earth, other planets, and even to different dimensions. Gore and viscera either stain or make up the walls of each new locale, and there’s always some new set piece to draw your eye and repulse you. Combat rooms are well designed, with each encounter feeling fresh no matter what demons you’re facing at that moment. Sure, you might’ve just fought a Hell Knight in the last room, but with a completely different map, players have to respond to that same enemy in a new way. In between fighting, most of Doom Eternal is actually spent platforming. This is another divisive aspect of the game, and it seems that I’m the only person who likes doing it. Doom Slayer can now grab onto ridged walls, and often this leads to jumping challenges that will have you falling to your death without well-timed clicks or solid air control. To me, the platforming felt fine, especially with how forgiving the dash is. The only major bummer in the level design department is the collectibles, as well as a few of the general puzzles. Almost every collectible in the game is easy to find, with easily spotted cracked walls highlighting the path to most of them. Doom is well known for its plethora of secrets, and most fans remember ramming up against walls and hearing the marine grunt while they hunted for some extra armor. That kind of design is outdated and was always bad, but the opposite end, where you might as well just be handed the collectible, is a bit of a bummer in itself. I honestly feel like some collectibles should’ve been mashed together, such as being rewarded a toy or piece of music for completing a secret combat room or a Master Level, which is an extremely difficult mission hidden in each level. There’s a middle ground here, and I would like Id to find it.

The last divisive thing is Eternal’s story. There isn’t much until the middle of the game, which is a huge infodump, and I figure most people don’t want to get spoiled. I’ll dance around it and say that a joke is turned very canon, and depending on your outlook, this is either badass, hilarious, or makes you roll your eyes. I’m in a mix of the first two camps since I don’t have as much reverence for Doom as some folks do. It’s a goofy series about a god-man who runs around shooting demons. I cannot take it seriously, and I’m ready to laugh at how the writers have patched together tons of lore that were never meant to mean anything and turn it into something that makes some kind of sense. I do wish most of the juicier bits weren’t relegated to codex entries, but overall I had fun with it. I just wish it wasn’t so bottom-loaded.

A special shoutout is, as always, necessary for Mick Gordon’s ripping soundtrack. Modern Doom would be half the game it is without his sick licks, and Eternal brings it home. Every action you take in-game is enhanced by the music, as any good game OST should do, but metalheads will be blaring these tunes by themselves for a while after playing. There’s a bit of a technical sound mixed into the songs at times, highlighting the mix of demonic and industrial atmospheres that make up Eternal’s environments. Mr. Gordon, you keep killing it out there.

It feels weird writing a review with so many mixed statements, but Doom Eternal is absolutely a game that deserves it. I loved Eternal, despite a few problems, but so many of the game’s mechanics are obviously deal breakers for the audience that fell in love with Doom 2016’s wish fulfillment. This is a vastly different experience, but an equally well designed and exciting one. If you’re aware of what you’re getting into, Doom Eternal is a rewarding experience full of ripping and tearing.