March 24, 2020 | by Tristan
Rollback Netcode and Two Characters May Have Saved Guilty Gear -STRIVE-
A herculean feat only ArcSys could pull off

With COVID-19 leading to the cancellation of both Final Round and Brussels Challenge for the FGC, Arc System Works’ plans to show off new trailers for their contentious upcoming fighting game Guilty Gear-STRIVE- needed to change rapidly. In effortless fashion, their string of announcements over the weekend may have just saved the public perception of -STRIVE-. With the announcement of a closed beta test (and a bit more) followed by the trailer for both Millia and Zato-1, ArcSys certainly enjoyed a good weekend for their flagship upcoming title.

Starting with the announcement on Thursday, Arc System Works’ social media accounts unexpectedly teased a big announcement coming. Later in the evening, ArcSys posted a link to the information page for their upcoming Closed Beta Test for Guilty Gear -STRIVE-. The page covered a variety of details to let fans know exactly what to expect, but news of a beta test didn’t seem to be as big of a deal as the teases earlier suggested. The page noted that the beta will be sometime in April and will include both online play during the network test and vs COM while the network test isn’t live. Seven characters will be playable, which includes characters announced from Sol and Ky through Faust, but ArcSys also included one interesting piece of information which has gotten many people excited about the future of the game: the inclusion of rollback netcode in the final product.

For those unaware, fighting games have had quite a bit of difficulty creating a seamless online experience since they are primarily played over peer-to-peer connections. This means that your connection quality is directly based on how well you and your opponent connect to each other and not based on how well you can connect to a dedicated server or data center as in larger games with a higher player count. Because of the nature of peer-to-peer connections, most fighting games use a method of lag compensation referred to as delay-based netcode to assuage connection issues. Unlike in a modern multiplayer game like Overwatch, when connection quality is poor in a delay-based environment, inputs are directly delayed by a certain amount of time in order to keep both players in sync. As you could guess, this isn’t very good for fighting games, where the exact timing of your inputs are what matters, and not just if you pressed a button or not.

Notably, some developers have made open source or proprietary solutions to these issues through the use of a rollback netcode framework for peer-to-peer connections instead. To give a practical example I’ll go back to Overwatch. If your game of Overwatch is laggy, your inputs aren’t permanently delayed by a set amount of time; you’ll actually notice that if there is lag, the game will instead snap you back to a point in time just a few fractions of a second before a connection interruption was experienced and attempt to correct the problem. This is rollback netcode; your game simulates what it thinks you are going to do, and as long as there are no issues it continues with your inputs, if an interruption is experienced, the game will notice and snap both players back to a determined point in the match. What this means for fighting game players is that you don’t have to time your inputs specifically for a certain amount of variable delay, instead you do your inputs normally (theoretically as if offline!) and if there is a connection issue you will notice and can pick up where the game leaves you off. Practically, there are usually some buffers to delay inputs by just a few frames so even if there is a one frame delay, you can count on it to consistently be a one frame delay and not variable as in a delay-based environment.

With rollback being the standard in games magnitudes more popular than fighting games, it seems like a no brainer that fighting game developers would work to include this sort of netcode framework in their games. Inexplicably, this hasn’t happened yet, and companies have been hesitant to focus on creating good rollback netcode by their own volition. Recently, this has resulted in community uproar and nearly all of the fighting game community has been calling for companies to work on implementing some form of rollback netcode into their games. Community figureheads like Sajam and Maximillian Dood have been calling for this reform for years, taking vocal stances to encourage fans to hold the functionality of their games to higher standards and provide feedback on netcode when appropriate. By being one of the first companies to clearly respond to the community and implement this system into a flagship game, ArcSys has put themselves in a very advantageous position. While people questioned whether or not -STRIVE- would be “true Guilty Gear” based on early gameplay changes, this move shows that ArcSys is not paying lip service by saying they are willing to fundamentally change their game based on feedback from the community.

This was no small change for the game, and the website for -STRIVE-‘s closed beta test confirms that while the beta will be using a delay-based netcode framework, rollback netcode will be implemented in the final product of the game. For Arc System Works to show players that they are willing to change underlying systems of the game to make a great experience, they have garnered tons of attention with many people saying that even with the gameplay concerns they have at present, they would be willing to give the game a try based on the transparency of ArcSys. Of course, this was before ArcSys dropped a trailer that addressed all those gameplay concerns.

Following the announcement on Thursday, ArcSys planned to show off a combined trailer of what was supposed to be shown in both the Final Round and Brussels Challenge trailers on Saturday. With everyone tuning in to YouTube on Saturday night to view the trailer, ArcSys had the perfect chance to show that they are following through on their commitment to the community. When the trailer dropped and everyone was able to see what they had in store, ArcSys delivered in a surprising, but rather modest way. The trailer was only one minute and six seconds long, but managed to show off two characters that fans were convinced simply wouldn’t be able to function in -STRIVE-‘s gameplay system: Millia and Zato-1. The superficial response seemed positive with many people praising both Millia’s and Zato’s design updates, however, it is what these characters can (and seemingly still) do that is exciting. 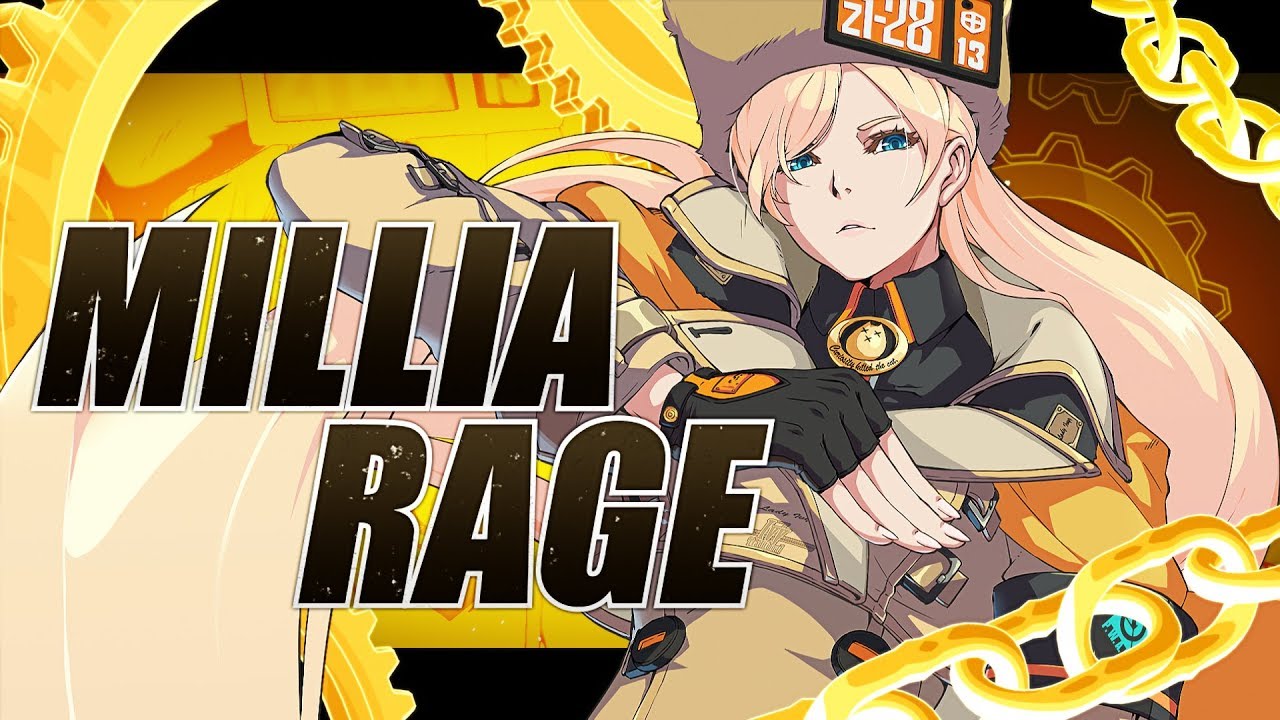 To explain meaningfully, I’ll have to use some basic fighting game terminology, but don’t worry, these are concepts you already experience in fighting games. For context, the community has been hesitant to fully embrace Guilty Gear -STRIVE- primarily due to some radical gameplay changes which have affected significant parts of the game down to core principles of Guilty Gear. The chief issue among these changes is that a component of standard gameplay called okizeme has been radically nerfed compared to the last Guilty Gear title, Xrd REV 2. Okizeme is a term meant to encapsulate the actions (and attacks) used after knocking the opponent down to hit them as they are getting back up. Xrd REV 2 was an extremely okizeme focused game with several mechanics designed purposefully or not to facilitate crazy sequences of actions which would make it very difficult for an opponent to wake up into and successfully block, eventually scoring the performer of the okizeme more damage, pressure, and options to win the game. Since most people so far have not been able to meaningfully play Guilty Gear -STRIVE- combined with the fact that each demo iteration of the game has included some radical changes, the community has only been able to form opinions based on gameplay mechanics directly shown to them, and most of those mechanics have been changed or created to cause powerfully hard to block okizeme to become much less common, or function completely differently in Guilty Gear -STRIVE-.

This brings us back to Millia and Zato-1. These two characters are known as okizeme monsters in Xrd REV 2 and are most powerful when they can score a knockdown to begin setting up absolutely wild okizeme setups and potentially mix up the opponent into a kill; this was to such an extent that Millia is rather notoriously known as a character that can either be double perfected and die early due to low starting health or get a double perfect because her opponent simply can’t block everything when she throws the kitchen sink at them. As mainstays of the series, fans were dubious as to whether or not Millia and Zato-1 would even be reflections of their past selves in the new Guilty Gear, and ArcSys managed to show that they weren’t going anywhere. Throughout the trailer, rather than showing superficially cool looking moves and following the formula of past trailers, all the gameplay was focused on what these characters do best. Hard to block setups were abound and while the trailer was only a few seconds, it shows that even if Guilty Gear -STRIVE- won’t be exactly like past games, ArcSys is still making sure there’s something in it for veteran players. Notably, none of the setups shown in the trailers involved meter and were obviously not close to what optimal okizeme setups for those characters would look like, so it’s possible that this trailer was even meant to show off that they have made changes at a larger scope, possibly allowing for these sorts of setups with more characters than previously thought in past demo builds. Time will tell if this stands correct, and with a beta coming up, it seems we shall find out.

I hope there’s a Guard button in Strive. pic.twitter.com/qPOfLKzjEG

Reception to both announcements seems to be very positive, and while people aren’t as focused on Guilty Gear as they usually are with present affairs in the world, people seem to be excited for the additions of Millia and Zato-1 into the game. With such a long amount of time until Guilty Gear -STRIVE- is set to release (possibly up to eight months) it’s now clear that huge changes will likely come to -STRIVE- before its final build. The game’s prerelease coverage has been quite unique due to the extreme amount of transparency and feedback solicitation from ArcSys for a game that was being billed as a complete restructuring of Guilty Gear. Thanks to it, we have seen each new iteration of changes as they have come out, and while that means we will definitely see the bad ones, that also theoretically means we’ll see the good implementations if ArcSys continues to be as receptive to feedback as they are now. Ultimately, we can only wait for more and I’ll see you all in the CBT (hehe).